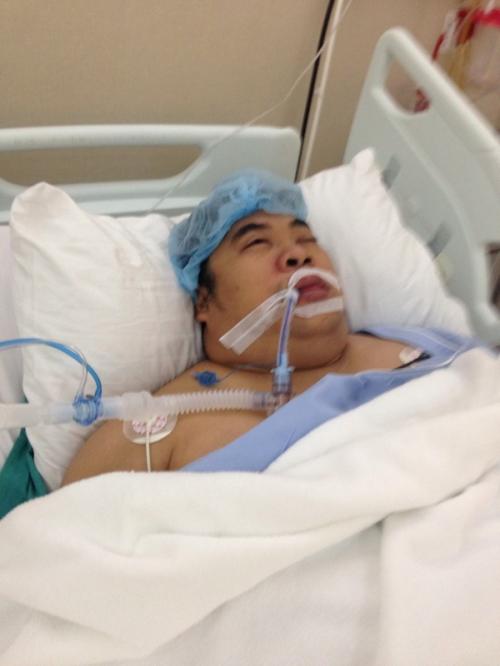 PHUKET: The Phuket resident savaged by a neighbor’s pit bull terriers in February – after he ran out of his house to help a woman who was being attacked by the dogs – is still in hospital fighting to save his right leg, which sustained a deep wound in the attack.

“He had an operation Wednesday, but went into shock and was taken into the intensive care unit [ICU]. He was released from the ICU Wednesday evening,” she said.

“The doctor operated on his right leg, which has a deep hole that is close to the bone. We are doing our best to keep his leg,” Mrs Benjarat said.

“He is okay now, resting in the hospital. However, he still needs at least two more operations,” Mrs Benjarat said yesterday.

Mr Tiensak is now receiving treatment at Bangkok Hospital in Bangkok, as per his mother’s request. Medical bills to save her son have spiralled to over one million baht.

“On March 12, he had a skin graft to repair his leg wounds at Phuket International Hospital, but he went into shock the next day. He was in the ICU for four days,” Mrs Benjarat explained.

“Then we moved him to Bangkok on March 20,” she added.

“So far, I have paid over one million baht for medical treatment, and there will be more bills for future treatments and surgeries, such as the two operations he will need in the next two to three weeks,” Mrs Benjarat said.

Mr Tiensak, speaking briefly to the Gazette by phone, said in a weak voice, “My wounds still hurt.”

Seeking justice is likely to take time as police confirmed they have not taken any action against the owners of the pit bulls that carried out the vicious attack on a public street.

“The dog owners have yet to be charged. We are still investigating the case,” Lt Col Sanich Nookong of the Wichit Police told the Gazette yesterday.

He explained that progress in the case was taking time “because both parties must come in together to settle the problem at the police station.”

“We cannot make any progress in the case until both parties are free to enter negotiations at the station,” Col Sanich said.

Mrs Benjarat’s lawyer said the family will be seeking damages by civil suit against the dogs’ owners, named as Prasert and Jantra Kulweeraaree, 69 and 65 years old.

“We will file for compensation, but it will be after the medical treatment has concluded because Mrs Benjarat is busy with her son at the hospital,” her lawyer said.