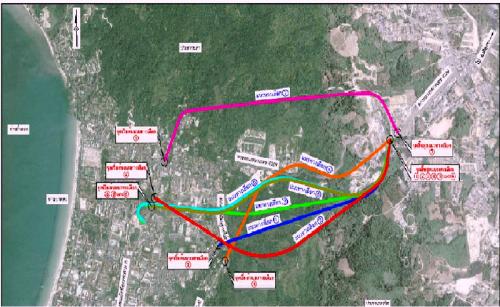 PHUKET: The Expressway Authority of Thailand (EXAT), commissioned to roll out the Patong Tunnel project, has released a video highlighting the preferred route the tunnel will take through the Phuket hills separating the Kathu valley from the beachside resort town of Patong.

The preferred route was chosen after a panel of experts investigated three major factors in the selection process, explained Kanok Khemnak, managing director of Enrich Consultants Co Ltd, which was hired to carry out the evaluation of seven possible routes.

“The first category of factors considered was engineering and traffic, in which we considered the length of the route, the aesthetics of the project, the efficiency of the construction to be undertaken and safety aspects,” Mr Kanok explained.

The category was attributed 30 per cent weighting in the entire decision process, he added.

“The last factor was the environmental effect. This was attributed 40 per cent weighting,” Mr Kanok explained.

“Route 2 is the best choice. It scored 72.49 from a maximum of 100 points. This is the route for which we will compile and present an Environmental Impact Assessment [EIA],” he added.

The route chosen and presented to a public meeting last week was the same one that stirred strong opposition from residents of Baan Mon in Patong in April, many of whom will have to be relocated from their family homes to make way for the mega-project (click here for story).

“We want to focus on traffic and safety. There is no need to build a tunnel. We [Baan Mon residents] have already suggested that it would be better to improve Route 4029 [Phra Barami Road, over Patong Hill],” one local resident said at the meeting.

“But if you are determined to build a tunnel, we already suggested Route 7 in order to make the road and tunnel as straight as possible to reduce the likelihood of accidents,” he added.

Patong Mayor Pian Keesin pointed out that Route 7 was ruled out by the Ministry of Natural Resources and Environment as the route affected a protected water source in the hills.

“I have spent more than 10 years trying to improve Route 4029. The best solution is what you are looking at right now,” he said.

Another public feedback meeting is slated to be held before the end of the month.

“At that meeting we will decide on the exact route the tunnel and approach roads will take. We will also have to discuss with residents how to minimize the impact on them and negotiate the rates for expropriating the properties required to build the project,” Mr Kanok explained.

“There will be a final public feedback hearing in August to summarize the overall plan. We expect to propose this project to Cabinet before the end of this year,” he said.

“The survey is to be completed before July and we will design the route in detail by May 2014. Construction will start in 2017 and we expect to complete the project in 2018 with a total budget of 6 to 7 billion baht,” Mr Kanok said.