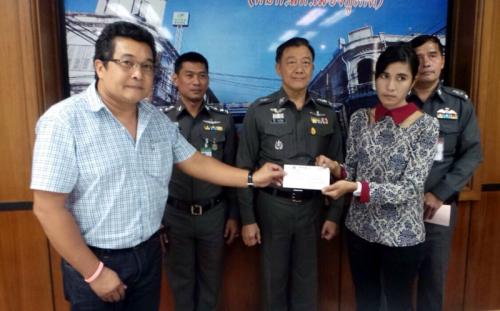 PHUKET: The fiancee of the man shot dead trying to stop a gold shop robbery in Phuket in April received 170,000 baht from the shop owner on Monday.

Surasak Wattananawin, owner of the C.P. Gold Master & Jewelry store, had promised to donate the money shortly after the murder of Apichet Choo-kliang, 32, and had already made one donation of 30,000 toward his funeral.

The still-grieving Satika Chansawat, Apichet’s long-term girlfriend and fiancee, told the Phuket Gazette, “I hope police can arrest the robber so he can be punished for what he did. He must pay the price.”

Maj Gen Choti and Phuket City Police Superintendent Sermphan Sirikong were on hand to witness the handing over of the cheque on Monday.

“We are still pursuing the killer and we believe we will get him soon,” Maj Gen Choti said.

He noted that the gold shop had improved security by installing bars to prevent customers from going over the counter as well as an electric front door that can be controlled by the shop staff.

Mr Apichet, an ex-military man with a knowledge of martial arts who had managed to stop two other robberies, might have thought he could stop the thief, Ms Satika said.

Instead, he was shot twice in the chest and left to lie unattended on the shop floor as the thief calmly gathered up 2.32 million baht of gold jewelry. The incident was captured on CCTV and uploaded to YouTube by police seeking the public’s help in identifying the man, who has not yet been caught (story here).

Police uploaded a second video to YouTube at the end of May. Recorded the evening before the robbery, the footage shows a man with a slight limp walking back and forth in front of the shop (story here).

Police believe the man depicted is the killer. Anyone with information has been asked to call Phuket Provincial Police at 076-212046.