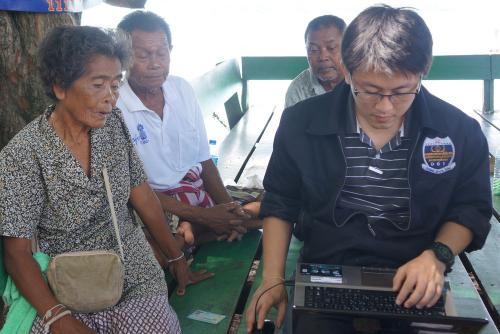 PHUKET: As part of the Department of Special Investigation (DSI) probe to establish how long Phuket sea gypsies have been living at Rawai Beach, officers have discovered movie footage of HM King Bhumibol Adulyadej visiting the community in 1959.

The footage may prove critical to the sea gypsies’ fight against court-ordered evictions based on land claims by private investors, the Chief of the DSI’s Consumer and Environment Protection Office, Prawuth Wongsinil, told the Phuket Gazette today.

“The footage shows many houses built under coconut trees in the traditional sea-gypsy manner. One of the investors claims his title deed was issued in 1965, so we will ask any villagers who appeared in the footage, or their parents, if they knew about this title deed being issued,” Lt Col Prawuth said.

“According to the law, in order for a title deed to be issued, officers must come to the site and measure the land. If any such officers had come to the site to do this, then why did none of the villagers protest it, considering they claim to have been living here since long before 1965?” Col Prawuth asked.

The footage is just one of the many aspects the DSI officers are investigating to establish how long the once-nomadic seafarers have been living at Phuket’s southernmost beach.

Col Prawuth and fellow DSI officers arrived in Phuket today to begin excavations at the village and to collect DNA samples. Joining the DSI team are officers from the Central Institute of Forensic Science, operated by the Ministry of Justice, and archaeologists from the Fine Arts Department Phuket office.

“The Rawai sea gypsies filed a complaint to Ministry of Justice, asking us to examine evidence in their village to prove they have been living in the area for generations,” Col Prawuth told the Gazette.

“And so we have collected evidence that we believe could be used against private investors claiming plots of land inside what the sea gypsies consider their village,” he added.

Some of the sea gypsies have received court orders demanding that they move from certain parts of what they claim is their land (story here).

However, so far none of them has moved, citing rights to remain on the land, Col Prawuth said.

Now, the sea gypsies are seeing their case grow stronger.

“We also have aerial photographs of the area from many years ago [story here] and we have a register of students from Wat Sawang Arom, which is nearby [map here],” Col Prawuth explained.

“About 30 sea gypsy students’ names appear on the school list before 1957, and some of those individuals are still alive today,” he said.

Specialists from the Fine Arts Department Phuket office are now excavating two sites where villagers believe their ancestors were buried.

To make the all-important connection to strengthen the sea gypsies claim, officers from the Central Institute of Forensic Science are collecting DNA samples from every family in the village. This will result in more than 60 samples in total.

“If we find human bone fragments at these sites, we will match that DNA with the DNA database we are currently collecting,” Col Prawuth said.

“If we confirm any human bones found at the site are of sea gypsy origin, we will question the private investors as to why they are claiming the land is theirs, and, if so, why did they allow the sea gypsies to bury their dead on the land?”

Regarding human bones being found at the village in March this year (story here), Col Prawuth explained that the bones could not be used as evidence.

“We are aware of the bones that were found, but they cannot be used as evidence. They were reportedly discovered by sea gypsies in the village who stand to benefit if the bones prove to be of sea gypsy origin, and the bones were removed from their original location.

“As evidence, they are tainted,” he said.

Thawatchai Chanpaisalsilp, a specialist from the Fine Arts Department Phuket office, told the Gazette his team will dig to a depth of about 1.5 meters.

“We believe will find human bones at that depth. We started digging at around 10am today, and we will be working on the site for a whole week,” he said.