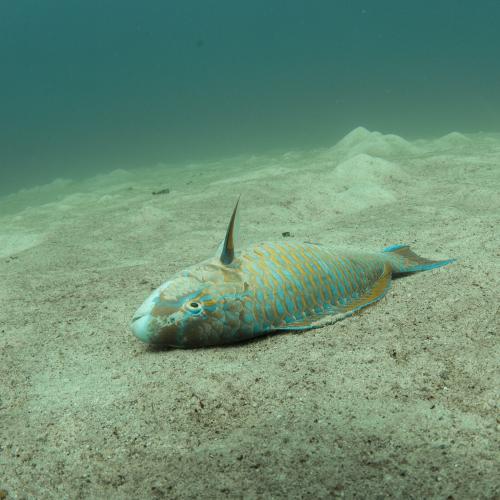 PHUKET: Several dead reef fish collected from the dozens of dead fish found at the popular dive destination of Koh Racha Yai were brought to the Phuket Marine Biological Center (PMBC) earlier this month after local fishermen, villagers and divers voiced concern that they may have been poisoned, perhaps by cyanide.

“In the last week to 10 days, there have been many dead fish found at the dive sites, including tropical reef fish and some of the more ‘hardy’ fish like parrot fish, eels, lion fish and so on,” wrote Phuket diver Jana McGeachy on July 31.

PMBC staff conducted an autopsy of the sample fish brought to them.

“An autopsy resulted in normal coloration of the gills and intestines of the fish, so it is possible they died from natural causes or the amount of cyanide was not enough for us to detect,” Phuket Marine Biological Center (PMBC) director Ukkrit Satapoomin told the Phuket Gazette.

“Nonetheless, I have notified the Phuket office of the Department of Marine and Coastal Resources (DMCR) about the incident,” Dr Ukkrit said.

DMCR Phuket office chief Thanet Munnoy confirmed that he had received the report about the death of the fish from the PMBC.

“We have notified villagers, who are our network of volunteers for keeping an eye on the island, to report to us if they see anyone illegally fishing in the area, especially if they are using any chemicals to kill the fish and coral,” Mr Thanet said. “However, we have yet to receive any reports.

“If we catch anyone fishing illegally, we have the necessary authority to take immediate action ourselves,” he said.

Reports of dead fish being found at Koh Racha Yai have since fallen off considerably, with some speculating that the dead fish had been dumped as unwanted catch.

Seawater quality to be monitored, results sent to island’s consulates