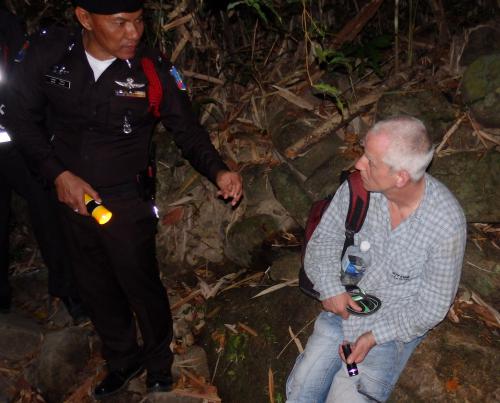 PHUKET: A German couple lost in a huge protected forest in central Phuket last night was returned to safety early this morning.

Jurgen Strempel, 51, and his wife Ludecke, 49, called the Tourist Police hotline 1155 at about 8pm, said Lt Adul Boonrat of the Thalang Police.

“They said they were on top of a hill between Ton Sai Waterfall and Bang Pae Waterfall,” reported Lt Adul.

The couple’s given location placed them within the Khao Phra Thaew Wildlife Sanctuary in Thalang, a sprawling protected rain forest covering 86,875 rai (13,900 hectares) where the highest peak rises 450 meters above sea level.

“We quickly assembled a search party of about 20 officers from the Thalang Police, Tourist Police, wildlife reserve and rescue workers from the Kusoldharm Foundation,” Lt Adul said.

“Officers divided into two teams. One went up the hill to look for the couple and the other went down the hill in case they came back down to the car park, where we saw a motorbike we believed the couple had rented.”

The hours-long search was hampered by darkness and inconsistent mobile connection as the officers scoured the rain forest.

“The search teams often had to use their radios to co-ordinate their search,” Lt Adul explained.

At about 1am, the couple was found, one kilometer from Bang Pae Waterfall.

“It took about an hour to get them safely out of the forest,” Lt Adul said. “We had to use rescue equipment to carry Mrs Strempel. She had sprained her ankle and could not walk.”

Mr Strempel was not injured.

“The couple was scared, tired and hungry. We did not get much information from them. Mr Strempel said through a Tourist Police Volunteer translator that he and his wife came to Phuket on holiday and were staying in Kathu,” Lt Adul explained.

As they were being led out of the forest to the waiting rescue vehicles, the couple had only a few words for the rescue team, “Thank you for helping us.”

The Strempels were taken to Phuket International Hospital.