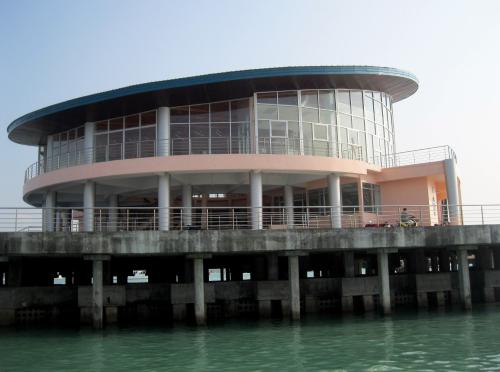 PHUKET: Phuket’s one-stop center for arriving yachts is scheduled to open next week.

The opening of the facility, on Chalong Pier [map here], was initially set for 2012, then delayed until 2015 before being moved forward to February 7.

“We signed a three-year contract in July 2013 to rent out the building, but have not been able to generate rental income since then. So we pushed to have the building open sooner.”

“The unofficial opening will be next Friday,” Mr Paiboon told the Phuket Gazette yesterday.

“Arriving yachties can come to the building on the Chalong Pier to clear entry with immigration, customs and the harbor master. This will make it easier for yacht owners to do all their paperwork, and it will also make it easier for marine officers. With the office right on the pier, they won’t have to go far to inspect boats.”

In May of last year, Phuket Vice Governor Chamroen Tipayapongtada said that the one-stop center could not open until a 15-million-baht tracking system was in place and a seawall constructed (story here).

The tracking system is installed, Mr Paiboon said, but construction on the seawall has yet to begin. However, the Marine Office budget for the wall – 98 million baht – has just been approved, he said.

“Vice Governor Chamroen will determine when the official opening of the one-stop center will be, but yacht owners can start using the new facility next Friday,” Mr Paiboon added.