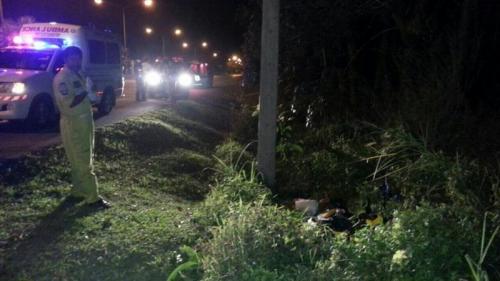 PHUKET: The deadly stretch of Thepkrasattri Road that runs through the northern Phuket village of Kor En claimed another life before dawn today after months of no serious accidents.

An unidentified man was riding in the northbound lane at about 3am when he lost control of his motorbike and hit a pole, breaking his neck.

When Tah Chat Chai Police arrived at the scene, about 500 meters north of the notorious “death curve” (map here), the rider was already dead.

Police could not identify him as he was not carrying any identification cards, said Capt Prakob Boonkwun.

Just hours before, another motorcyclist also broke his neck after crashing into a pole on the Khaolan-Bang Jo Road in Srisoonthorn.

“He was rushed to Thalang Hospital, but pronounced dead soon after arrival. His neck was broken and he had serious wounds to his head,” Capt Niphon Temsang said.

Eyewitnesses reported that Mr Somporn was riding at high speed and not wearing a helmet when the accident occurred.