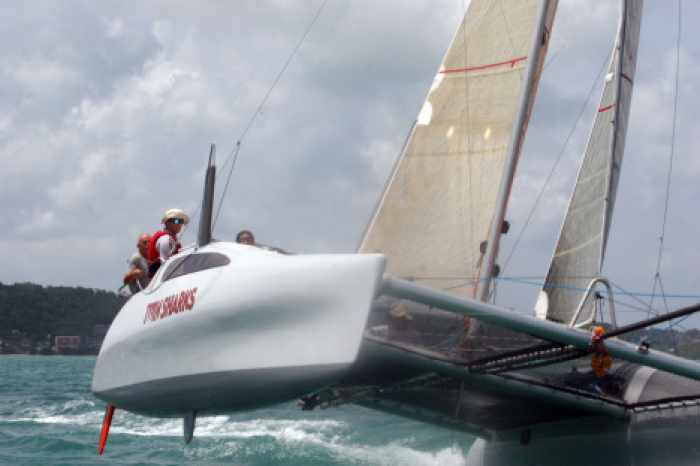 PHUKET: Hot favorite Twin Sharks, which capsized during practice in strong winds off Phuket yesterday, is expected to begin its campaign in the Firefly Sport 850 class in the Multihull Solutions Regatta tomorrow.

Skipper and owner John Newnham and his crew are all safe, with a few of them suffering minor bumps and bruises, the Phuket Gazette was told last night.

“Twin Sharks is back on its mooring and most of the damage has been sorted,” one source said. “The mast and running gear were not damaged. A number of items floated out of the submerged hull and were lost forever, but all is well.”

The racing mainsail was damaged and is under repair. However, the boat is expected to join the fleet on the start line tomorrow powered by its two-year-old mainsail.

“John has a new main and headsail coming for Phuket Raceweek,” the Gazette source said.

Phuket yachting stalwart Grenville Fordham, a long-term member and now treasurer of the Ao Chalong Yacht Club (ACYC), told the Gazette that the Twin Sharks crew’s recent racing form makes them one of the top favorites in the regatta’s Firefly class.

“The crew’s form in the last three to four regattas they’ve competed in make them one of the fastest in the fleet,” Mr Fordham said.

Mr Fordham expected tight racing in all classes in the regatta.

“We have some very fast newcomers to the regatta, including ‘Stealth cats’ Adrenaline, Galeforce and Java. It will be very interesting to see how they perform,” Mr Fordham said.

Drawing much attention in the starting lineup in the Racing Multihull class are three Corsair trimarans, built by Australian boat builder Seawind Catamarans at their production facility in Vietnam.

“We are all keeping an eye on Bullet, which is straight out of the box and owned by the production manager in Vietnam,” Mr Fordham noted.

Mr Fordham will be joining long-term sailmate Bob Mott on the renowned catamaran Nina, and will be competing against the familiar faces of Alan Carwardine on Asia Catamarans Hurricane, David Liddell on Afterburner, Peter Boyd on Zig Zag and Henry Kaye on Sweet Chariot.

Of special note in the Open Multihull Class is the return of decades-long Phuket expat Tim Milner on Seekronghuk, named in remembrance of “four busted ribs”.

Mr Milner will be racing against Roman Sirokov of Russia on Star Fruit and Thai yachtsman Khun Charanya on the local yacht White Conche.

“But apparently Tim [Milner] will not be carrying a spinnaker,” Mr Fordham said.

Race director Simon James held a skippers briefing at 9am today, when he explained that they will be attempting to have the races finished in time for crews to get ashore by 1pm today and by 2pm Saturday and Sunday in order to beat the tides.

The weather forecast is for sudden passing showers and westerly wind squalls of up to 20 knots today, with the wind gaining strength over the weekend.

Best viewing of the fleet in action can be seen from the ACYC yacht club on the shores of Chalong Bay or from the high vantage points on the hills at Ao Yon.

The Multihull Solutions Regatta will conclude on Sunday, just in time for the crews to regroup for the Cape Panwa Hotel Phuket Raceweek 2014, which begins next Wednesday (story here).

Cape Panwa Hotel Phuket Raceweek takes place on July 16-20, 2014 at Cape Panwa Hotel. Organized by Media Business Services, the award-winning regatta is set to welcome one of the most competitive fleets of boats in the event’s history.