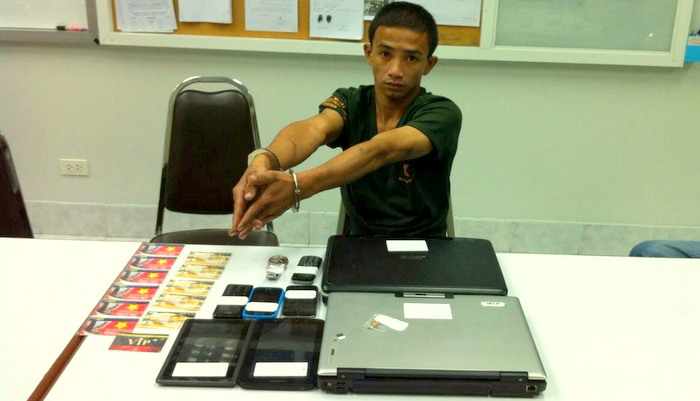 PHUKET: Police yesterday snared a serial burglar who confessed to having robbed 12 Phuket residences since mid-June.

The 22-year-old Phang Nga native, Raewat Kasirak, was identified by police from many CCTV footage clips recovered from throughout the island, explained Lt Col Somsak Thongkliang of the Phuket City Police.

Mr Raewat, who was arrested in front of the Phuket Vocational College in Saphan Hin, took police back to his rental residence on Luang Poh Road.

“The suspect confessed that many of the items in the room were stolen,” Col Somsak said.

The iPhone 3 and gold necklace were from the robbery of a Toyota Fortuner on July 5 (story here).

“He sold the necklace from this robbery for 55,000 baht,” Col Somsak said.