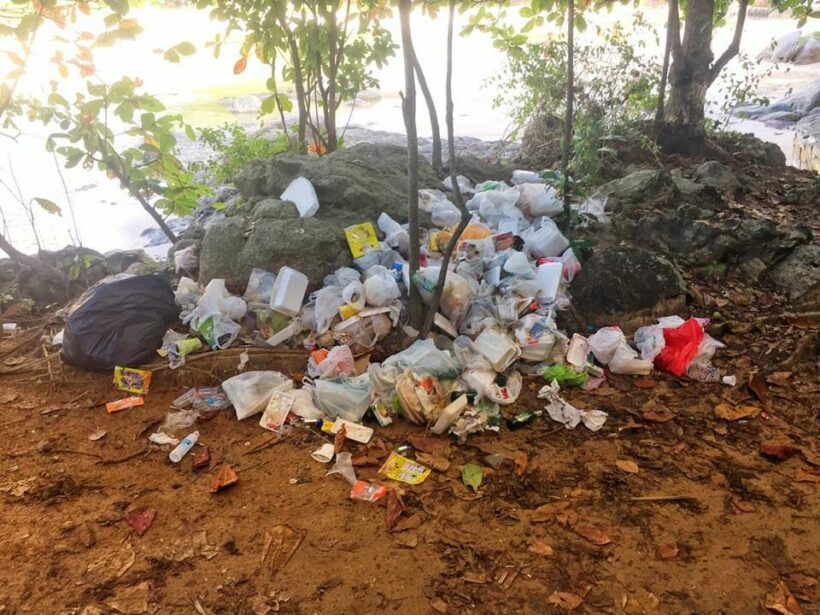 Although Phuket officials have repeatedly called on local administrations to clean their areas, one beach on the island province continues to struggle with its trash problem. At Nai Harn beach, plastic trays are often left near the water, and sometimes, people even leave their trash right next to a garbage bin (instead of in it).

One unnamed local resident told The Phuket News that even though street cleaners go to the beach every day, they only sweep leaves, and don’t pick up trash. He said watching the cleaners sweep the leaves, while completely ignoring the trash, broke his heart. He added that despite the municipality providing cleaning resources, those resources are ineffective.

“….the municipality’s logic to prioritise sweeping leaves off the footpath and road over the removal of plastic bottles and rubbish that…invariably ends up in the ocean”.

There have been several campaigns to tackle pollution in Phuket, but the province has a ways to go. Last month, Phuket provincial governor Narong presented a plan for 10,000 new minimum wage jobs that would focus on cleaning Phuket.

In February, two volunteer organisations joined forces to clear garbage and weeds from the Bang Yai Canal, which runs from Samkong into Phuket Town on Phuket’s east coast. The groups said they hope to clear the “bad smells” coming from the canal. The president of one group said Covid-19 had deterred the groups doing cleanup work every week, and they instead met once a month. The director of the other group said the project would be sustainable if the government also helped.

piyanat
Not only for Phuket! Its a big problem for whole thailand :( Cqman
Why not staring by installing trash bins in public areas ? I find it incredibly difficult to find trash bins in Thailand, except in malls.