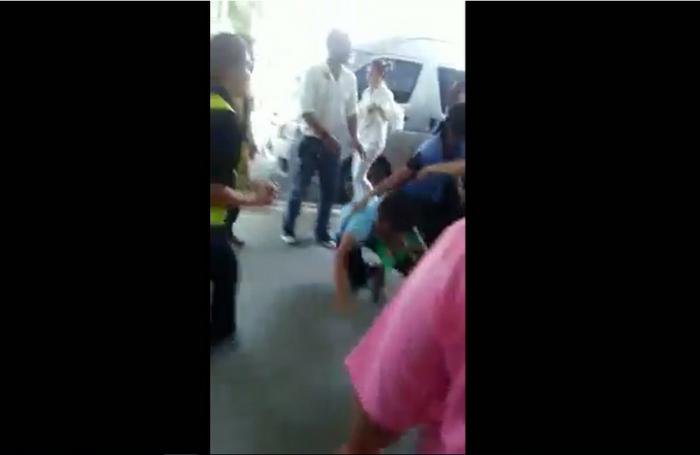 A video clip shot by a bystander was shared and widely criticized on social media. The caption of the video is “Krabi International Airport fight between green plate taxi and taxi meter [sic]. I don’t want to see this happen again”.

The clip shows a man being pushed to the ground by another as well as shouting and confusion in the background.

Several security guards jumped in to stop the fight, while astounded tourists and locals watched the embarrassing spectacle.

“Even though no one was seriously injured, such incidents impact the reputation of the airport and Krabi in general,” said Krabi Airport Director Attapon Nuengudom. “We’ve called for a meeting between the parties to the fight, along with police officials and members of the Krabi Land Transport Office, in order to find a solution.”

“The cause of the issue is that both sides did not obey the regulations set out for them. After security officers calmed them down, both sides agreed to stop,” he added.

Surprisingly, the two drivers involved in the fight were let off with nothing more than a ‘warning’.

“We’re happy to cooperate with the airport and officials,” said Nakin Petsoot of the Airport Limousine Service in Krabi. “From now on, if any of our employees disobey regulations or indulge in arguments or fights, we will suspend them from work for three to seven days,” he said in an apparent confirmation of the relaxed local view of taxi driver behavior at airports.

“We just want justice and for everyone to know that we are legal service providers, not a mafia,” he insisted.