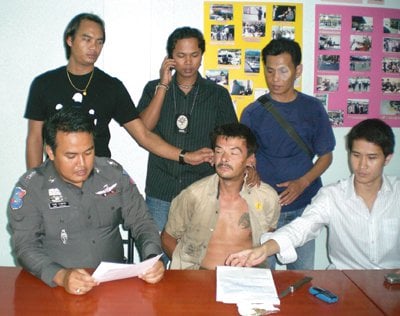 The arrest followed complaints from Swiss businessman Rene Langansand, 42, that Minnig claimed to be an Interpol agent and offered protection services for Mr Langansand’s Koh Lanta business – for a fee.

According to a Tourist Police press release, at 5:30 pm yesterday Mr Langansand filed a complaint at Phuket City Police Station claiming that Minnig, 39, had made phone calls and sent text messages to his wife, Atchara Yoongthong.

In the messages, Minnig allegedly threatened to kill Langansand’s entire family if protection money was not paid by yesterday evening.

The undercover officer and two more Tourist Police officers doing surveillance then moved in to arrest Minnig, who stabbed one of the officers before he could be detained. The officer sustained only minor injuries.

On searching Minnig, officers found a package of cannabis hidden in a cigarette packet. Minnig confessed to having bought the drug in Koh Lanta, police said.

During questioning at the Phuket Tourist Police Office, Minnig failed to produce his passport.

He has been charged with extortion, resisting arrest, possession of a Class 5 drug (cannabis) and illegal entry into the Kingdom.

“We think that Minnig was not working alone,” Maj Bundit said. “We are now tracking down his accomplices,” he added.