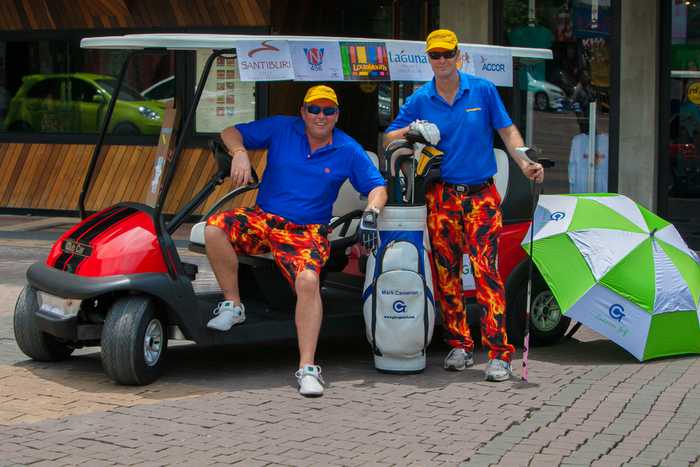 PHUKET: Golfers Graham Haslam and Mark Cameron are preparing to set a world record by driving an electric golf cart from Pattaya to Phuket to raise funds for local children’s education charity Phuket Has Been Good To Us.

The “standard” electric golf cart selected for the record-breaking undertaking, to begin in March next year, will include some modifications, namely solar panels which will help to increase the power per charge by 20 per cent, giving the cart a range of about 85 kilometers per charge.

“While we expect the journey to be challenging, tiring and fun, the main aim of the world-record attempt is to draw attention to the fantastic work of the Phuket Has Been Good To Us Foundation and raise money to support their work further.”

During the journey, the record go-getters will be joined on the golf courses by Asian Tour professionals such as Berry Henson – pending their schedules.

There will be no problem recognizing the pair, as their clothing has been sponsored by GOT shirts and Loud Mouth golf apparel.

The men will also be playing the famous St Andrews Old Course during the trip by paying a visit to GolfZone’s golf simulator in Ekkamai, Bangkok.

Should the golf cart start to fall behind schedule, Phuket-based Go-Kart racing driver Dylan Young may be called in to make up lost time.

Among others, Fox Sports Asia and Golf Channel Thailand will be airing footage of the trip and highlighting the experiences of the journey.

The trek will conclude with a gala fund-raising event at the Hard Rock Cafe in Patong, where the drive will be recognized by Guinness World Records as a new world record, and the actual golf cart used on the journey will be auctioned off to raise funds for the charity.

All proceeds from the challenge will go to Phuket Has Been Good To Us, a Thai-registered charity established in the aftermath of the 2004 tsunami.

The money raised will enable the charity to continue to expand its much needed English education program, which provides free English lessons to more than 1,000 underprivileged Thai children aged 3 to 18 in three government schools on Phuket.

Oil and gas products and services provider Gaylin International, as well as Phuket’s own Tai Pan Night Club in Patong, have already stepped up as sponsors for the record attempt.

For more information on how to join in sponsoring the world-record attempt, email graham@phukethasbeengoodtous.org.