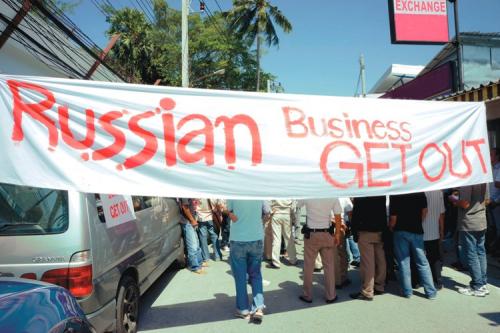 PHUKET: Welcome to the brand new year of twenty thirteen. So far the twenties have been pretty disappointing. Music seems to have taken on an alter personality with televised ‘talent shows’ now taking us dangerously close to a purgatory known as ‘karaoke-land’.

There are the movies, but sequels to mega-blockbusters seem to be rolling out faster than one of those greyhounds chasing the magic, metallic rabbit. Round and round we go.

Politics gets a yawn. Terrorism a niggle of anxiety and sports… well, we have Lance to thank for his fabulous great big lie: “I did not dope.”

Getting into the fray in Phuket, it seems momentum has turned to talk, news and idle chit chat about all things Russian. Not since the Cold War lapsed into a coma and the Berlin Wall came tumbling down like a poorly built shophouse, have these guys been in the spotlight so much.

It seems there is an outcry against the rising tide of Russian visitors here, doing business and buying property. Cresting on what has been one of the best high seasons ever, the tone is bittersweet from the tourism sector.

To frame the picture, as the world economy retracted during the global financial crisis, Asia, which includes Phuket, boomed. We built up a steady flow of new midscale hotels, for a large part indistinct properties which were vaguely similar, in an Alzheimer’s sort of way, and lacking in any real DNA. Personally I call this sector the ‘same sames’.

At the same time, prosperity grew among local citizens who started new service businesses such as shops, restaurants, travel agencies, tour companies and real estate agencies. Mass tourism enabled them to buy new cars, condos and cash flowed in. It must also be said that credit limits have also gone into orbit.

Everyone was prepared for more tourists, but what happened next was a massive wave of ‘Russians’ (more correctly on a broader scale, Eastern Europeans).

Charter flights filled to the brim, tour buses were jam packed and the beaches were full of the great untanned.

Suddenly there was an outcry from every corner of Phuket: “Too many Russians!” The island was overrun with them. Media reported on growing violence and then there was a taxi blockade over suspected Russian transport drivers; illegal shops and businesses. The police were called in and the ominous cycle of investigation began. My sarcastic self might add a LOL after that last line.

As for these new visitors, after decades of isolation, they just want to bust out and have some fun. Who can blame them? I’ve been to Moscow in the winter. Phuket has always been a haven for snowbirds, starting with the Germans, then the Scandinavians and now this emerging mass market. You could add China to the equation, though somehow those following that flag have not incurred the wrath of the locals. At least not yet.

Tourism and business leaders are issuing quotes about wanting higher spending visitors, and ranting about “zero baht tourists”. The last term is too crazy to even accommodate as I dare you to travel on a two-week holiday anywhere and not put money into the local economy.

Phuket’s tourism sector is like a child who goes into a candy story with a thousand baht. The eyes are ultimately bigger than the appetite and when the money is spent and all the ice cream is gone, there are only groans of remorse. The fact is that the island keeps on building more and more and once you punch the ticket of mass demand, there is no getting off the train.

But let’s get back to the angst over all these Russians. For the most part, the entire group is actually made up of a far larger Eastern European market. While I’m American, from a country well known for poor awareness of geography, at least I can tell the difference between Poland, Latvia, Uzbekistan and Kazakhstan.

Look at Russia; it gave us the Bolshoi, great literature and of course those guys in red. No one is perfect. My own USA has bred an entire culture of gun-toting, Tea Party-supporting, Nascar-loving, country-and-western-music-singing, God-fearing xenophobes. I’m not even going to start poking fun at the Brits, Aussies, Germans or the French. It’s too easy.

In Asia’s crowded house, and yes, here in Thailand, which somehow sleepwalks itself from crisis to crisis, moderation and living in a rainbow world of multi-culturalism is its greatest strength. Phuket’s welcome mat to overseas visitors and investors should not be rolled up simply because we now have a large segment of Russian tourists.

Moving through 2013, the current spate of xenophobia will no doubt dim in the light of an, as yet unseen, freight train of unanticipated events and circumstances. Our lives today move in what seems to be ten-minute cycles and it seems the next big debacle is never more than a mouse click away.

And Lance – yes, you did dope.

Bill Barnett is managing director of C9 Hotelworks and can be contacted through C9hotelworks.com.