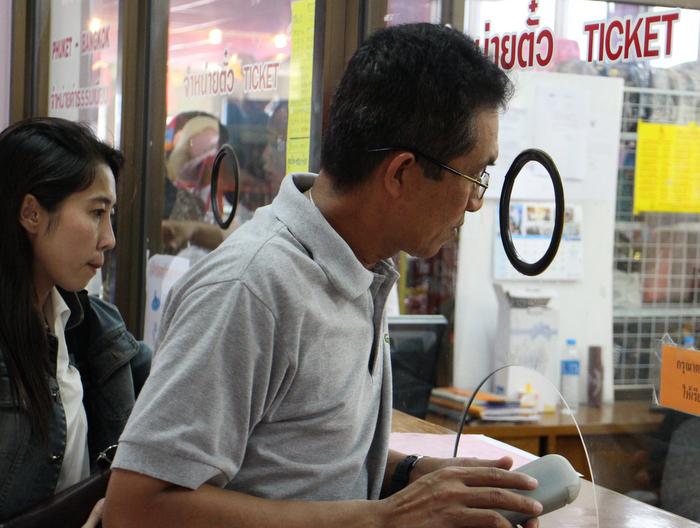 PHUKET: Extra buses, drug and alcohol tests for drivers and GPS to monitor speeds have been ordered to ensure that holiday travelers make it home safely for the Songkran holidays.

Ten extra buses were on standby at Phuket’s Bus Terminal 2 yesterday to cope with the 50 per cent increase in travelers as officials rolled out new disciplinary regulations for drivers who failed drug or alcohol tests.

Last year, drivers who tested positive and confessed to taking drugs were sent to drug rehabilitation. After a second positive test, they were reported to the police (story here).

The new regulations give drivers two chances, after which their license to drive a bus is permanently revoked, said Terayout Prasertphol, Chief of the Phuket Land Transportation Office (PLTO).

“The first time a driver fails a drug or alcohol test, we will send him to rehab and suspend his license for 20 days. If a driver’s assistant tests positive, he will also be sent to rehab and suspended from work for 15 days. The owner of the bus will be fined 5,000 baht,” Mr Terayout said.

“We’ve also ordered that GPS be installed in the buses,” said PLTO officer Jaturong Kaewkasi. “They will be used to monitor speed. If the driver goes over 90kmh, an alarm will go off in the bus. If he maintains that speed for am extended period – for example, longer than it takes to pass another vehicle – the owner of the bus will be notified.”

Phuket Governor Maitri Inthusut was on hand to inspect safety preparations and send travelers off. “We want to make sure those who wish to travel can, and those who do travel make it home safely,” he said.

“It’s good to know the drivers are tested,” Mr Efremov said. “It gives us confidence.”

Driver drug and alcohol tests will continue through the seven days of danger.