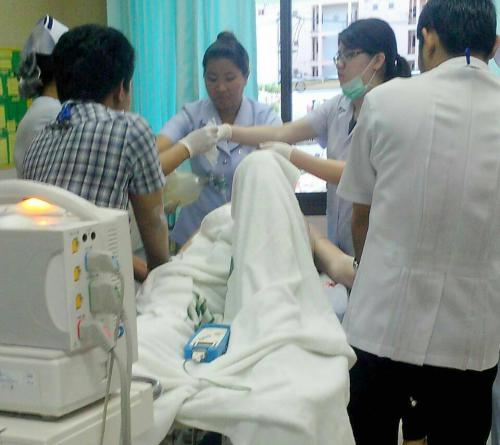 PHUKET: Life guards at Patong Beach rescued two Russian men from drowning within 10 minutes of each other yesterday.

Vladimir Himonov, 67, was rescued from the surf in front of the Ocean Plaza shopping center (map here) at 11am.

“Life guards saw Mr Himonov swimming about 200 meters from shore. They realized that the Russian tourist was struggling in the large waves as he attempted to swim back to the beach,” Patong Police officer Tawatchai Srimai told the Phuket Gazette.

“While a life guard was heading out to help him, Mr Himonov disappeared under the waves,” he said.

After minutes of searching, the life guard finally spotted Mr Himonov and brought him back to shore, Col Tawatchai said.

“There were strong waves, and he was too tired to swim back to the beach by himself. Then he disappeared into the water,” he explained. “Another tourist swimming nearby went to assist him and to signal for help.”

On seeing the signal, life guards took a boat out to recover the Russian tourist and his savior.

“Both Russian tourists were rushed to Patong Hospital, where they are now safe and recovering,” Col Tawatchai added.

Phuket Poll: Millions of more tourists are on their way, but why do they come?