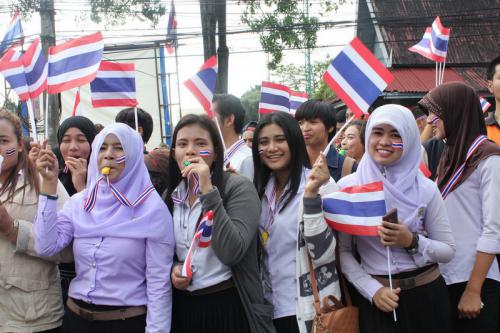 PHUKET: More than 1,000 student protesters departed from Phuket Provincial Police Station this afternoon satisfied with the results of their march, which had arrived at the island’s police headquarters to ask officers to join their campaign to remove Prime Minister Yingluck Shinawatra from office.

“We would like all police officers to be working for the people of Thailand, not the government,” Chinnawat Buree, one of the leaders of the student protesters, said.

“We will send 50 officers out to ensure the safety of the protesters in Phuket. We will continue to do our best to serve the people of Thailand,” Col Saneh told the students.

Satisfied with the results of their march, the students returned to Phuket Provincial Hall before starting to disperse, said Mr Chinnawat.