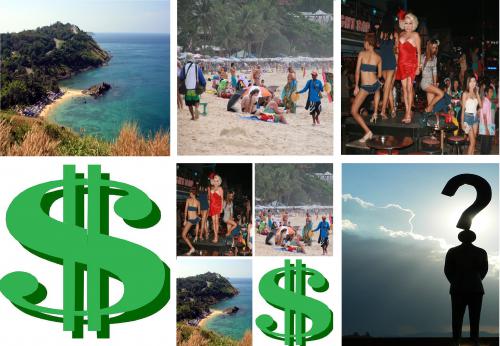 PHUKET: As the tourism high season looms nigh, Phuket residents and business folk are readying themselves for another record-setting onslaught of tourists to see the new year in.

Right on cue, the Phuket Carnival “Fun Fest”, the island’s annual week-long party to unofficially mark the beginning of the high season, will start on December 15 (story here).

Even before the high season has arrived, national tourism statistics show that over a million more Chinese tourists visited the Kingdom from January through October than all of 2012.

The Asean market has also boomed, with about 800,000 more regional tourists arriving in Thailand between January to October this year than all of last year.

Millions of those arriving in Thailand are flying directly into Phuket International Airport, or taking domestic flights, buses or van trips to ensure they arrive on the island’s fabled shores.

To this, the Phuket Gazette asks our readers in our latest online poll: “What single feature draws the most tourists from around the world to Phuket?”

Responses available in the poll are as follows:

1) The natural beauty of Phuket and the surrounding region

4) The value for money offered compared with other holiday destinations

5) Phuket’s unique mix of all of the above

6) I don’t know why anyone would come to Phuket