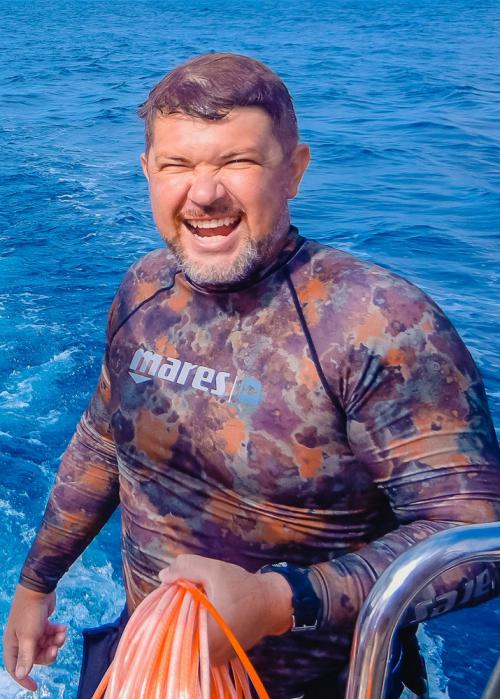 Mr Lipatov, freediving alone, made his last descent at 3:50pm, to 25.5 meters according to his dive computer. The computer also recorded a very fast ascent, explained one of Mr Lipatov’s friends.

Mr Lipatov’s body was recovered at about 5:20pm and rescuers immediately started preforming CPR. However, it was too late for the PADI scuba diving instructor.

“He was a professional, but that didn’t save him. No one could imagine that it could have happen to him,” said Elena, one of Mr Lipatov’s many friends on Phuket.

“I had spoken with Denis on occasions about freediving and spearfishing,” Mr Wonka said. “Though he had several years of experience, to my knowledge, he was never formally trained as a freediver.”

The number one rule Mr Wonka stressed over and over again was to never freedive alone.

“A shallow-water blackout is a bad outcome to a pressure-related phenomenon that plays a role in any ascent from a freedive, which is why freediving with a buddy is so essential to safety.

However, the sport at the competition level is very safe, he said.

“There has not been a single permanent injury sustained during a freediving competition in 20 years of the sport,” he said.

Without witnesses at the scene it is hard to know exactly what happened, though the likelihood of a leg cramp leading to Mr Lipatov’s death, as originally reported by police, was unlikely in such an experienced diver, Mr Wonka said.

“It is very likely he suffered a shallow-water blackout,” he suggested.

It also seemed unlikely to Mr Lipatov’s friends that he would panic underwater and do anything that would lead to his death.

“Denis always kept calm. Never became emotional, even when everything collapsed around him, because he knew that it would just be a waste of time,” Elena told the Gazette.

“He practiced freediving over the last few years. He really loved it. He loved everything about the sea: diving, freediving, fish – everything. This was his passion: to go deep into the underwater world,” Elena said.

Mr Lipatov’s wife, Olga, has contacted the Russian Embassy to secure the necessary documents to have her husband cremated after a service at Phuket’s Russian Orthodox church.

“Denis and his wife, Olga, have been together for 12 years. It was the kind of love you can read about in books and see in the movies. He was happy with her and told her so almost every day,” Elena said.

“Denis was at the peak of his life. He had so many projects and so many future plans. He could do the things he loved with the woman he loved near him and supporting him all the time.

“That’s what makes this tragedy so overwhelming – he was so vivid, so energetic and so active,” Elena said.

The funeral service for Mr Lipatov is underway now at the Russian Orthodox church on Thepkrasattri Road, Soi Nanai. The funeral ceremony will conclude at noon.

The cremation and ceremony conducted by monks will be held at the crematorium at Wat Chalong starting at 2pm today, and a memorial dinner will be held at 5:30pm at the Russian restaurant Veranda (parking at Karon Temple area – map here).

Dress-code for the ceremonies is white and blue, with the family asking that no black be worn.