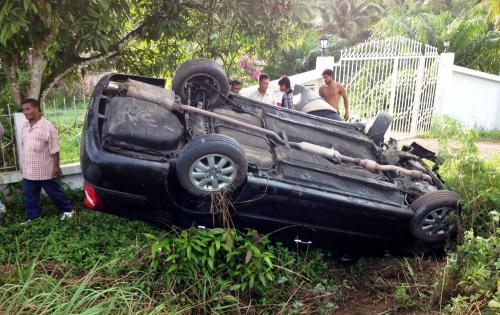 PHUKET: Phuket Court Chief Judge Parinya Chaowalittawin became a traffic-accident statistic over the weekend when he survived an accident en route to Krabi.

“I was on my way to see my parents in Trang, and had left Phuket at about 4:30am on Saturday,” Mr Parinya told the Phuket Gazette.

“It was about 6am and I was some two kilometers past Krabi Airport when it happened, on a part of the road that was slippery because of the rain, and sharply curved.

“I was not driving particularly fast but I did lose control of the vehicle. I gritted my teeth, pulled the handbrake up and tried to keep my head down. I expected the worst but at the same time felt calm and resigned to my fate,” he said.

The judge’s car struck a bridge and flipped into a ditch. But the judge kept his cool.

“I got out the car, went to a nearby house and asked to use a phone. The kind fellow who opened the door obliged, and told me that two other drivers had had similar accidents on the same curve earlier that morning.

“If I hadn’t been wearing a seat belt, I would probably have died,” he said.

“I felt alright, and intended to continue on to Trang, but the friend who collected me sensibly advised we should return to Phuket,” he said.

Mr Parinya went to Vachira Phuket Hospital for a checkup and was found to have no major injuries. His doctor advised he take a rest followed by a week of physical therapy.

However, Mr Parinya went to work.

“I went back to work as I have plenty of work to do,” he said.