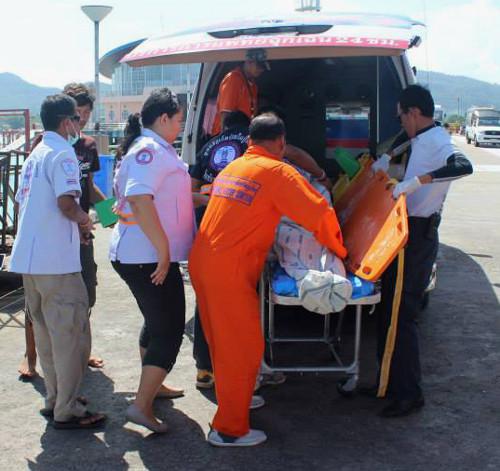 Lin Hunhing, 30, was swimming near the island after lunch when he ran into difficulties.

“There were big waves, up to two meters high,” said Thada Sodarak of the Chalong Police.

“He tried to swim back to the shore, but the waves dragged him away.

“Lifeguards went to help him and brought him back to the beach. A guard gave him CPR, but it was too late,” Capt Thada said.

Mr Lin’s body was transported to Chalong Pier by rescue workers and police.

“We took his body to Vachira Phuket Hospital to confirm the cause of death,” Capt. Thada added.

Mr Lin is one of many Chinese tourists who have died while swimming at Racha Yai. The most recent cases reported by the Phuket Gazette are those of Li Ran, 28, who drowned on June 18, (story here) and Yuan Dingrong, 56, who drowned in November last year. (story here).