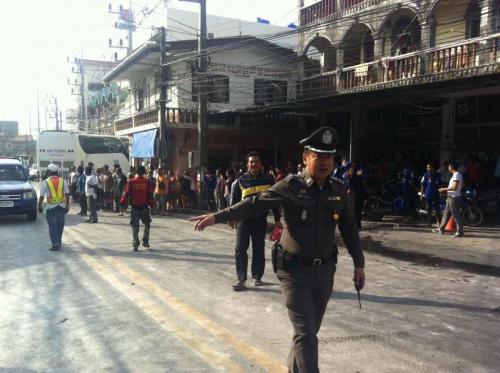 The bus came to a stop after ramming a concrete barrier at the bottom of Patong Hill near Wat Suwankiriwong (map here), explained Patong Police Superintendent Chiraphat Pochanaphan.

“The driver lost control of the bus, which hit the other vehicles and stopped after hitting a power pole,” Col Chiraphat said.

“Khanrat Kajornjit, 47, the driver of a Toyota Vios that was struck by the bus, and Panthida Jaruwat, 40, a tour guide sitting at the front of the bus, were both killed in the accident,” he said.

On board were 15 Russian and 14 Thai tourists, who had been picked up in Phuket Town, Col Chiraphat explained.

“Most of them suffered cuts in the accident,” he said.

“We were told that the brakes failed as the bus descended the hill into Patong. We are investigating to confirm whether or not this is accurate,” Col Chiraphat added.

The Phuket office of the Department of Disaster Prevention and Mitigation (DDPM) confirmed that of the 26 people rushed to Patong Hospital, 11 Russians and eight Thais have been discharged.