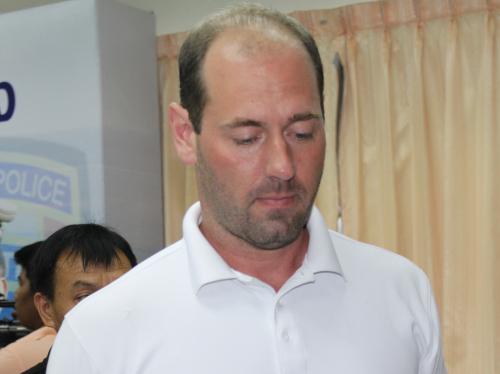 PHUKET: Prominent Belgian expat Georges Sirre, who has lived in Phuket for nine years, was among three foreigners named by Phuket Immigration today to face deportation for previous offenses.

Officers arrested Mr Sirre, 56, at his home in Rawai late yesterday afternoon after receiving a request from the Belgian Embassy in Bangkok, Phuket Immigration Superintendent Sunchai Chokkajaykij told a press conference this morning.

“Mr Sirre broke probation conditions in Belgium after he had been convicted of child molestation charges,” Col Sunchai said.

“Mr Sirre was later released on a good behavior bond, while serving five years’ probation, but he was prohibited from leaving the country [Belgium],” Col Sunchai added.

Phuket Immigration revoked Mr Sirre’s permit-to-stay and are making arrangements to deport him.

“He will be sent to Bangkok tonight, and later he will be handed over to Belgian authorities,” Col Sunchai told the Phuket Gazette.

Mr Wayne, 41, was arrested at the Bel Aire Resort on Sainamyen Road in Patong, near Patong Hospital (map here) on Sunday.

He was wanted by the Federal Bureau of Investigation (FBI) for the alleged sexual assault of a 13-year-old girl in Houston, Texas (story here).

Mr Wayne entered Thailand on November 1, and at the time of his arrest was unaware that a warrant had been issued by the Harris County Court on November 4 (story here).

“We revoked his permit-to-stay and he will be sent to Bangkok tomorrow, where officers from the FBI will take him into custody,” Col Sunchai told the Gazette.

Swede Johan Wetzelmayr, 32, was arrested near Chalong Circle on November 5 and has been in detention at Phuket Immigration for two weeks, waiting for police from Hua Hin to arrive and take him into custody.

“We learned that the Prachuap Khiri Khan Court issued an arrest warrant against him for allegedly stealing a motorbike in Hua Hin,” Col Sunchai said.

“We contacted Hua Hin Police. They will arrive in Phuket tomorrow to take Mr Wetzelmayr into custody and return him to Hua Hin where he will face trial,” he added.