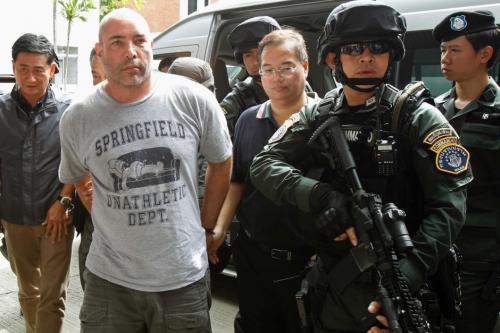 PHUKET: Five men arrested in Phuket in the same operation that snared the alleged contract killer and US drug dealer Joseph “Rambo” Hunter were extradited to the United States today.

The five foreigners were arrested in Phuket along with Mr Hunter, a former US Navy Special Forces officer who allegedly ran one of the world’s biggest drug networks.

Mr Hunter was arrested at his home in Kathu on September 25 (story here).

Testifying in a New Jersey District Court on September 28, Mr Hunter entered a plea of not guilty.

Manhattan US Attorney Preet Bharara, however, said in a statement, “The bone-chilling allegations in today’s indictment read like they were ripped from the pages of a Tom Clancy novel.

“The charges tell a tale of an international band of mercenary marksmen who enlisted their elite military training to serve as hired guns for evil ends,” he said (story here).