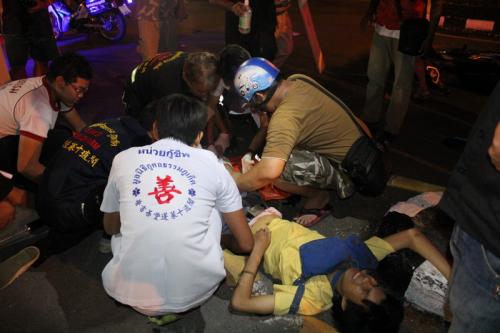 PHUKET: Police are searching for the driver of a Chevrolet vehicle believed to have been involved in a hit-and-run in Phuket Town last night.

Phuket City Police duty officer Akaradech Phongprom received a report that a man riding a motorcycle had been struck down on Narisorn Road, near Phuket Provincial Hall (map here), at about 10:30pm.

Officers arrived at the scene to find Kowit Charoensuk, 23, in obvious agony, crying for help in the middle of the road. Both his legs were broken.

“Not far from Mr Kowit, we found his motorbike, which suffered extensive damage in the impact,” Capt Akaradech said.

“Near his motorbike, we found the license plate Gor Nor 361 still in its Chevrolet dealer frame. We will use it to search for the driver,” he added.

Staff at Vachira Phuket Hospital confirmed to the Phuket Gazette that Mr Kowit has been admitted to the hospital’s Orthopedics department, where he will undergo surgery later today.