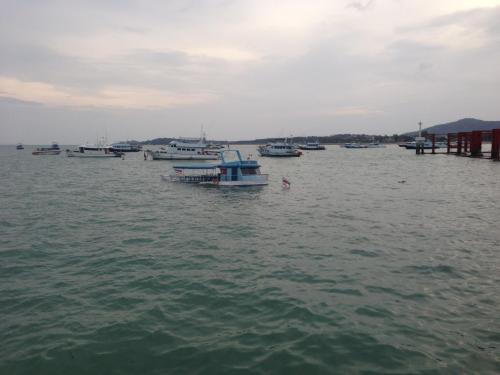 PHUKET: A tour boat carrying 15 tourists collided with a concrete mooring and sank during its approach to Chalong Pier during low tide yesterday afternoon.

All 15 tourists on board, and the skipper, were safely rescued.

The accident occurred when the tourist boat Darunee, skippered by Suthip Kasathit, 50, was returning with about 15 passengers from a snorkeling trip to Koh Hei (“Coral Island”), Phuket Marine Office chief Phuripat Theerakulpisut explained.

When the boat, better known as the “Booze Cruise” (emblazoned on the front of the vessel’s wheelhouse) was about 500 meters from Chalong Pier, it hit and got stuck on a mooring block, said Mr Phuripat.

“Mr Suthip tried forward thrust to free the boat from the mooring, but it didn’t work. When he put the boat in reverse, water came in and it started to sink,” Mr Phuripat said.

“All of the tourists on board jumped into the water without life jackets. Boat operators in the area saw the incident and rescued them,” he added.

Mr Phuripat attributed the cause of the crash to reckless driving.

“The concrete mooring was installed to mark a boat anchorage. It has been there for months. Every boat driver in the area knows where the moorings are located and where the rocks are. The boat driver did not drive along the right path,” he stated.

“Within this week, I will announce that every boat must travel at no more than five knots during their approach to the pier or the shore,” he said.

“Usually they go at 20 knots, even when they are getting close to the pier or shore,” Mr Phuripat alleged.

“It is dangerous for people or divers who might be around their parking area,” he added.

The mooring that was struck is one of 200 installed in Chalong Bay in November. Yachties expressed concern at the time that they posed hazards (story here).

Some of the moorings were thought to be too close together, posing the danger of boats colliding, which may have contributed to the death of Richard Spraggs, who fell off his boat when he was adjusting his anchorage (story here).

The other danger noted was that some moorings were sunk in areas that are very shallow at low tide.

One local yachtsman confirmed to the Phuket Gazette this morning that several moorings were installed inside the fairway – the dedicated channel for vessels to approach and depart from Chalong Pier – but that only four were still marked by buoys. The rest remain underwater, out of sight.