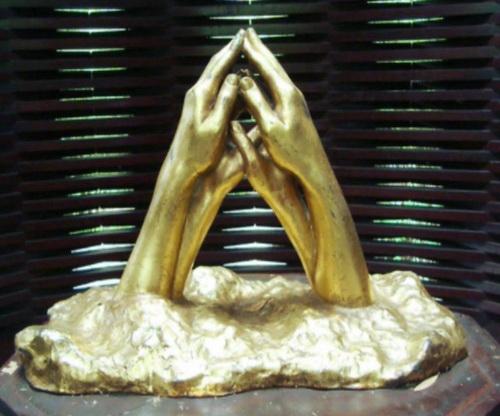 PHUKET: “Hold me close”, the two sculptures designed by late French artist Louise Bourgeois to commemorate victims of the 2004 tsunami along the Andaman coast, will be given a new, secure home in Krabi.

Local officials plan to provide a place on the beach at Hat Noppharat Thara where the metal sculptures can be admired, but will remain safe from thieves and salty sea air.

“We are now in the process of designing and budgeting for a new place to display both sculptures, so tourists can see them and remember the lives lost in 2004,” said Hat Noppharat Thara National Park chief, Chaithat Boonphuphantanti.

“One sculpture is a hand emerging from a wave, the other is one pair of hands embracing another pair,” said Mr Chaithat.

The two statues had been on display at Noppharat Thara Beach for years when they were noticed by Deputy Permanent Secretary for Culture Apinan Posayanont in 2010 (story here). Fearful that the salty conditions were damaging the sculptures, he had them moved to Bangkok, where they were shown at the Bangkok Art and Cultural Center.

Local residents demanded the statues be returned, so they were brought back the same year to be displayed in the Krabi Provincial Hall, where they remain today.

“I requested that the sculptures now be returned to Nopparat Thara Beach,” Mr Chaithat explained.

According to Mr Apinan, Ms Bourgeois designed the pieces to be displayed in an area surrounded by trees, with a pond.