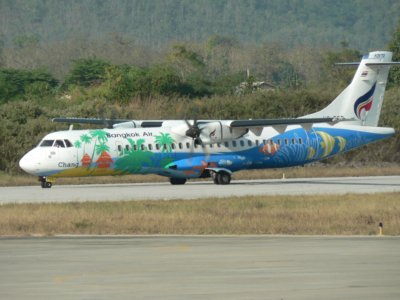 PHUKET CITY: A Bangkok Airways aircraft skidded off the runway at Samui Airport and crashed into an aviation control tower earlier this afternoon.

The accident took place at about 2.30pm.

The pilot, Chartchai Punsuwan, was killed in the accident.

Rescue teams and workers rushed to the scene to evacuate the passengers.

Initial reports said the 75-seat aircraft, arriving from Krabi, slid off the runway because of poor weather.

In recent days Samui has been hit by heavy rains.

A Nation reporter at the scene said the aircraft did not catch fire.

The aircraft, an ATR-72 with carrying capacity of 70, was carrying 68 passengers, two cabin crew and two pilots.

The Samui air crash is the first major aircraft accident in the region since the crash of One-Two-Go flight OG269 at Phuket International Airport on September 16, 2007.

The Phuket crash, which claimed the lives of 90 passengers, also happened during stormy weather.

An official investigation into the cause of the Phuket crash cited pilot error as a major factor.