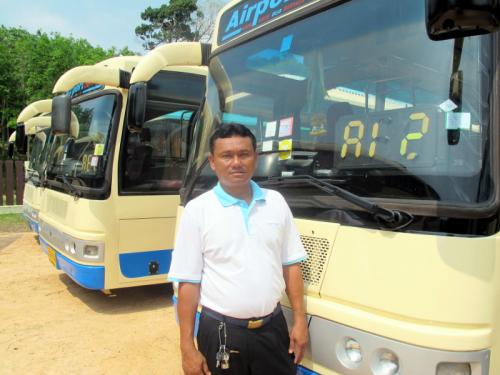 HUKET: The ruling committee for Phuket’s public transportation authorities has signed into effect the permit to allow the new bus service from Phuket International Airport to Patong to launch on July 1.

The government departments represented at the meeting – and who voted in favor to launch the service – comprised the Phuket Public Prosecutor, Phuket Police, Phuket Provincial Administrative Office, Phuket City Municipality, Phuket Chamber of Commerce, the Department of Rural Roads Phuket office and the Phuket Highways Office.

“The bus service will initially operate from Phuket Airport to Patong. After negotiations with taxi drivers in Karon have proved successful, we will expand the route from Patong to Kata,” said Phuket Land Transport Office (PLTO) Chief Terayout Prasertphol.

The service will begin with the first bus departing Phuket Airport at 6am.

“The 24-seat buses will run every hour until 9pm, making16 round-trips a day,” Mr Terayout said.

“Although the bus stops along the route have yet to be set, the bus terminus in Patong will be at Baan Zan Market, which is located behind the Junceylon shopping mall (map here),” he added.

Mr Terayout vowed to push ahead to expand the routes to the other major tourist beaches on Phuket’s west coast, including Rawai and Kamala.

“Every committee member voted that this bus service should go ahead. The new service will benefit the people of Phuket and tourists. They will have more choices in road transport at affordable prices,” Jaturong Kaewkasi of PLTO told the Phuket Gazette.

Vice Governor Chamroen voiced his opinion clearly: “Now that everyone has agreed to launch the new bus service, let’s get moving on it.”