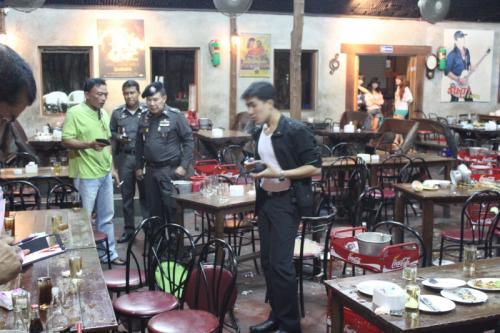 PHUKET: Two men were stabbed in a fight at a live-music venue near Chalong Circle early this morning. One of the men died; the other is expected to recover from his wounds.

Police have arrested one suspect and are searching for four more.

Officers received the report of the stabbing at 3am. When they arrived at Saraphanpleng bar on Patak Road, about 300 meters from Chalong Circle, they found tables and chairs overturned, said Lt Wuthiwat Leangboonjinda of the Chalong Police.

The body of Udom Sritar, 37, was lying in a pool of blood under a table.

“We found a deep stab wound at the base of his skull and three more in his chest,” said Lt Wuthiwat.

“One of Mr Udom’s friends, Chaiyan Maikarn, 40, had also been stabbed in the chest. He was taken to Vachira Phuket Hospital by rescue workers from the nearby Phuket Provincial Administrative Organization tourist rescue center,” he explained.

According to witnesses, Mr Udom, a brother of Capt Prasert Sritar of Chalong Police, was attending a friend’s birthday party at the bar. As he and his friends were drinking, Mr Chaiyan became embroiled in an argument with five men at a nearby table, said Lt Wuthiwat.

They soon started fighting, and when Mr Udom saw Mr Chaiyan being beaten, he tried to stop the men, but they stabbed him several times with a pointed chisel.

Mr Udom pulled out an 11mm handgun and fired at the men once. His shot missed and he fell to the floor and died, Lt Wuthiwat said.

“Four of the men fled the scene. One, Sittichai Thingsiri, 32, was left behind,” he said.

“Mr Sittichai was identified by a waiter as being in the group that assaulted Mr Udom. He was quite drunk when we found him,” he said.

Mr Sittichai told police that the fight started because of unfriendly looks on both sides. He identified two of his friends, named by police only as Mr Na and Mr Nu, as being involved in the fight.

Police have charged Mr Sitthichai with assault causing death and are looking for the four other men.