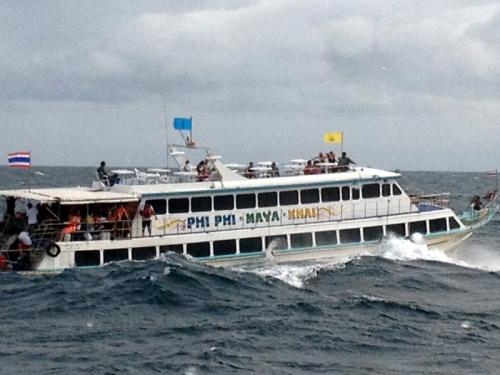 PHUKET: More than 100 people were rescued from a tourist boat that started sinking while returning from Phi Phi Island to Phuket this afternoon after being damaged by big waves.

The ferry, Puean Foong II, was near Chicken Island (Koh Kai), about 15 nautical

“When we received the report at 4:10 this afternoon, we sent a Marine Police vessel to rescue everyone,” Col Chatchai said.

However, by the time the Marine Police boat arrived, the passengers and crew had been picked up by another tour boat, the Pichamon, which was traveling from Phuket to Phi Phi. The crew saw the ferry in trouble and stopped to help.

“Pieces of the floor came flying off,” one of the rescued passengers, wet and still wearing his lifejacket on board the Pichamon, reported.

“Water was gushing in, and we realized, ‘get some life jackets’,” he said.

The Pichamon continued on to Phi Phi with the rescued passengers and was expected to arrive at 7:30pm this evening.