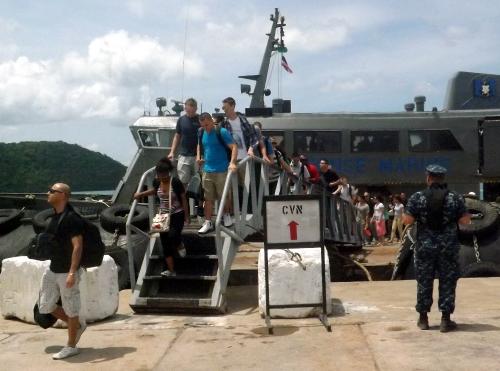 PHUKET: The island’s economy – especially at the party town of Patong – will be getting an early low-season boost thanks to this week’s visit by the American Navy supercarrier, USS Nimitz along with its armed missile-cruiser escort, the USS Princeton, which both moored off Phuket early this morning.

Topping off a week-long journey through the South China Sea, and what was described by one officer as a “dedicated maritime maneuver” through the Strait of Malacca, the 5,000-strong crew, including about 400 US Marines, will be relishing Phuket and its many offerings through to Friday, after which the ships are expected to depart.

With some 5,000 US sailors, both men and women, taking shore leave over the next four days, the Gazette estimates that the amount of extra dough to be infused into the local economy, should be no less than one million dollars – or about 29.9 million baht by today’s exchange rate.

This estimate will become reality if each of the crew members spend at least US$ 200, on average, or about 6,000 baht.

This shouldn’t be too difficult judging from the scene around noon today at Makham Bay, where eager sailors, many of whom had waited in line for hours to come ashore, didn’t even bat an eyelid at the vendors asking for 300 baht for a large bottle of beer (60 baht retail).

A handful more, notably higher ranking and paid officers, were more than willing to skip the 250 meter long queue for the group bus, opting instead for a private taxi ride into town.

It won’t be all R&R for the US Navy, who is living up to its reputation for making a positive impact in all the places it visits – Phuket is no exception.

During a Media tour this morning of the 45-year-old nuclear powered, floating city, Rear Admiral Michael S White told the Gazette that of the crew members, about 400 will be engaging in voluntary community service, or COMSERV projects.

At least 13 community relations activities, will be organized in coordination with the local Navy League Phuket (NLP), officially known as the Thailand Southern Seaboard Council.
“We’ve been able to plan some special events for our sailors. They will spend some time at learning centers and schools with a close interaction with the Thai people.

“I think there may even be a soccer game. It is very rewarding for our sailors and I hope it repays, in a small way, the hospitality you show us each time we visit,” the commander continued.

“The US Navy maintains a strong presence in the region, and we’ve been treaty allies with Thailand for nearly 60 years.”

Admiral White noted some of the routine exercises that the US and Thai militaries join in every year, including events like Cobra Gold and Cooperation Afloat Readiness and Training, also dubbed CARAT.

“The Royal Thai Navy are exceptional mariners and we enjoy sailing with them. The Nimitz strike group is on a routine deployment, and we will spend our time in the region to promote security, stability and peace.

“And we will also take advantage of our time to exercise with our partners,” he said.

Clarifying the US Navy’s prime imperative in the region, the commander said: “We are very interested in improving our interoperability to respond to natural disasters and provide humanitarian assistance [and] to conduct search and rescue and aid those at distress [out] at sea.”

“The better we communicate and sail together, the more responsive we can be,” he continued.

“Thailand is a favorite destination of our sailors [because of] the natural beauty of the islands, the amazing culture, and my favorite, the food.”

Asked about the USS Nimitz’s current tour, Commander White said that the ship is about two months into a six-and-a-half-month-long deployment.

“After we leave Phuket, we’ll continue to sail in the Indian and Pacific Oceans before returning home to Everett, Washington in the late fall,” he concluded.