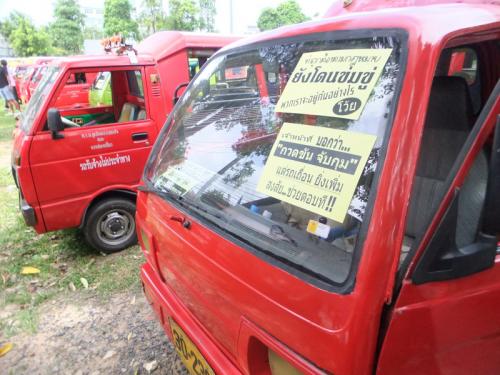 PHUKET: A protest by about 100 tuk-tuk drivers today won the drivers a crackdown on illegal taxis, which the tuk-tuk clan says are stealing their jobs.

After staging a convoy from Kathu, the protesters parked their tuk-tuks at Sanam Chai, across the street from Provincial Hall in Phuket Town (map here).

“We do not have enough money to pay the monthly installments on our tuk-tuks and to cover living costs. Our incomes have fallen because many illegal taxis are stealing work from us,” said protest leader Sakol Srisompoch.

Mr Sakol identified the source of the tuk-tuk drivers’ woes as pickup trucks illegally modified to carry passengers in the back; illegal “black plate” taxis (standard sedan cars illegally used as taxis); and vehicles legally registered as used taxis, but in provinces other than Phuket.

“They are stealing our passengers in Patong, Kata and Karon. Almost all of them work only at nighttime” he said.

“We want government officers and the police to be more strict. Arresting these people and charging them with the highest penalty should be a top priority.

After voicing their concerns, the drivers marched across the street to hand their complaint to Phuket Governor Maitri Inthusut.

Governor Maitri was unavailable at the time, so Phuket Vice Governor Sommai Prijasilpa received the complaint.

Attached to the complaint was a list of names of allegedly illegal taxi drivers in Patong that the tuk-tuk drivers want arrested, to make it easier for officials to take action against them.

“I will order police in every area to crack down on and arrest illegal taxi drivers,” he said.

However, he added the police must catch illegal taxi drivers in the act of ferrying passengers, otherwise they were powerless to arrest them.

“If local residents can help us find them, and even take photos for us, it would help a lot,” he said.

Vice Governor Sommai gave police until July 15 to report to her the results of the crackdown.

“I do not want to see people getting away with breaking the law in Phuket,” she said.