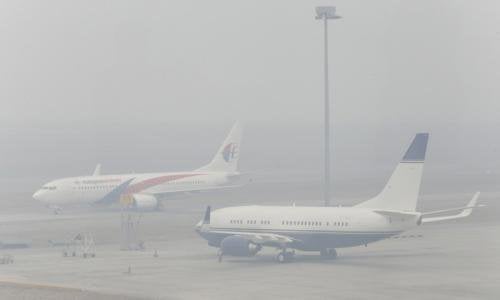 PHUKET: The Phuket weather office has predicted that the strong southwest monsoon wind that has caused the current rough seas along the Andaman coast will also keep the record-level hazardous haze from Indonesia away from Phuket.

By Sunday, states of emergency had been declared in two southern states of neighboring Malaysia (story here).

However, officers at the Southern Meteorological Center at Phuket International Airport told the Phuket Gazette this morning there was little chance of the haze reaching Phuket.

“The westerly wind speed over Phuket is at 10 knots, which will keep the haze out of this area,” the officer said.

“The worst effect we might get is the sky might be a little dim, but there will not be enough to cause any ill health effects,” he added.

Dr Pornsri Suthanaruk, director of the Regional Environmental Office, was adamant that the skies above Phuket will remain clear – if the current monsoon wind prevails.

“The number of hot spots in Indonesia is falling and the wind will not carry the haze from Riau province on Sumatra to us in Phuket,” Dr Pornsri said.

“However, we are keeping our eye on the haze situation in Indonesia. The Pollution Control Department will set up mobile weather stations in Satun and Songkhla today to monitor air pollution,” she added.

If the wind changes and the haze does descend on Phuket, of all things more rain might be what the island needs, Dr Pornsi said.

“We are in the southwest monsoon season, and this can help us because when it rains, the falling water will clear the air of dust particles,” she explained.

Only two weeks ago, Phuket was on flood and landslide alert as heavy rains doused the island, causing flash flooding in Patong and raising fears that Phuket Town canals would burst their banks (story here).