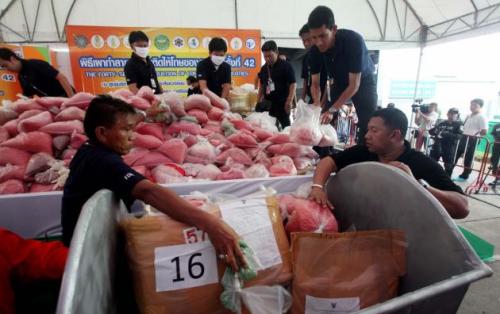 More than 3 tonnes of drugs torched
The Nation / Phuket Gazette

Cholanan was speaking at the 42nd official drugs-incineration ceremony in Ayutthaya’s Bang Pa-in Industrial Estate, in which 3,363 kilograms of illegal drugs worth over Bt10 billion were burnt. This includes 31 million yaba tablets worth Bt9.3 billion.

Food and Drug Administration officials still have up to 28 tonnes of illicit drugs worth Bt83.74 billion in storage pending court rulings and a central committee’s approval for destruction, he said.

PHUKET: Department of Special Investigation (DSI) chief Tarit Pengdit yesterday revealed progress on the DSI probe into a scam to avoid the higher taxation on imports of luxury cars by registering them as reassembled.

Tarit said seven relevant agencies would meet on Friday June 28 to find solutions for the unwitting owners of the falsely registered car owners, as well as deciding on punishment for those who had modified car engines and gear systems to fool inspectors.

According to an informed source, among the five cars submitted for inspection yesterday were four Mercedes-Benzes seized because the engine, body and gear set carried the same series number, suggesting they were not reassembled cars as claimed.

Tarit also reported on progress in a separate DSI probe into a red Ferrari that was among six super-cars burned in Nakhon Ratchasima while on the way to being registered as reassembled cars in Si Sa Ket late last month. The DSI said the Ferrari, which had been through a complicated process involving some 50 people, originally had a different number plate, which had been concealed beneath a new identity.

Tarit said the auto parts for the Ferrari were imported on June 15, 2011 by JMW Motor Co Ltd and TNT Express Co Ltd, then reassembled by Thanatas Khunnuch’s L Auto Shop. The car was then registered for tax as an LPG-adapted vehicle on September 20, 2011, with engineer Kraisit Mahiwan checking the car’s condition and certifying the LPG conversion – which was supposedly done by Chatchai Sukchanurak’s Power Gas Co Ltd. After registering it with Si Sa Ket’s Transport Office, Thanatas transferred ownership of the car to Nareunart Kuansawat, who is suspected of tax evasion in the super-car trade.

“Then the authorities were notified that the car had been switched to use petrol instead of LPG and the owner requested a new registration book on grounds that the old one was missing,” explained Tarit.

“The car was later transferred to Bio Power System Thailand Co Ltd, which used it in Lop Buri, hence the new licence plate “Kor Tor 0444 Lop Buri”, he said, adding that ownership of the Ferrari had been switched three times in 223 days.

PHUKET: Police insisted yesterday that the chauffeur of Akeyuth Anchanbutr masterminded his abduction and murder – to rob him of his cash.

Senior police held a press conference to dispute a theory of Akeyuth’s lawyer, Suwat Apaipak, that the businessman may have been killed on someone’s order.

Pornchai brought a team of doctors who performed the autopsy on Akeyuth’s body. One told the press that Akeyuth’s genitals were not hit, as suspected. The doctor said decomposition had caused swelling and a bruised testicle, as the businessman was killed five days before his body was exhumed. The doctor said there was no trace of injuries on Akeyuth’s face either.

A forensic officer told the press conference that they had checked all handprints inside the van and did not find any from other people apart from the handprints of the chauffeur, Santiparb Pengduang, and his accomplice.

Pol Maj-General Naiwat Padoemchit, an officer in charge of the investigation, said that Akeyuth could not escape although there were only two suspects abducting him, because he was handcuffed with his arms behind his back.

Naiwat said the van’s doors were also locked with a “baby-locking” system so Akeyuth could not open the doors on his own.

Supisal said he was assigned to check the record of Santiparb and found that the suspect was an aggressive man and could have planned the abduction on his own. Supisal said Santiparb was also addicted to gambling.

Khamronwit said all evidence pointed to Santiparb killing Akeyuth for money. He said if Santiparb had been hired to murder Akeyuth, he would have confessed because his parents were now also facing charges of accepting stolen money.

PHUKET: The Environment Office 16 yesterday affirmed that Indonesian forest-fire haze hovering over Thailand’s lower South is declining and would not affect people’s health.

The NOAA-18 satellite detected few fires on Sumatra Island – down from 437 on Monday to only 174 spots on Tuesday. Phuket, Songkhla, Narathiwat and Yala saw less amounts of tiny-particle dust from the previous day, they said.

‘Morning after’ pill may be approved
The Nation / Phuket Gazette

PHUKET: The Reproductive Health Development Committee is considering allowing people to use morning-after pills in a bid to prevent unwanted pregnancy.

The Royal College of Physicians will study the drug usage instructions and controlling measures before proposing the plan, which includes this measure, in 60 days for implementation later on.

Adults should realise it is difficult to prevent youths from having sex, said Public Health Minister Pradit Sinthawanarong, who chaired the committee’s meeting yesterday.

He said the panel planned to use social media to educate youngsters about safe sex and where to get or buy birth control products.