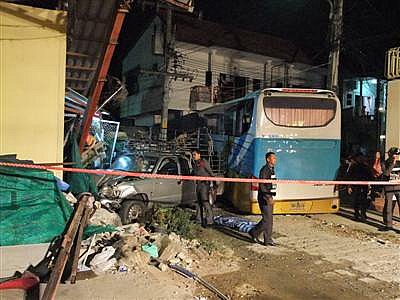 PHUKET: Another Phuket tour bus, this time carrying a group of Chinese tourists, crashed at the base of Patong Hill last night, injuring two people and causing extensive property damage.

The single deck bus was carrying about 18 tourists when its braking system failed coming down Phra Barami Road, near Suwankiriwong Temple, at about 7pm.

The bus continued straight along Pisit Gorani Rd and then, unable to negotiate the sharp corner there, continued down a side soi where It damaged part of the MP Hotel, a pickup truck, utility poles and a motorbike before plowing into a townhouse and finally coming to rest.

One female Chinese passenger on the bus was sent to Patong Hospital for evaluation after exhibiting signs of shock.

The only other injury was to 26-year-old motorbike driver New Datewan, who suffered a minor laceration to his right leg. He was treated at Patong Hospital as an out-patient.

Sorn Sarasit, a 43-year-old security guard at the MP Hotel who witnessed the accident, said the bus came down the hill very fast, making it impossible to negotiate the curve.

The driver, identified only as “Udom”, fled the scene after the accident, a common practice in Phuket.

Police will likely contact his employers at Trans Pleasure Co Ltd, which ran the bus with the name “Classic Tour” on it, a reliable source said. The coach also had the name Somchai Intrawong painted in Thai on it.

An insurance agent gave a rough assessment of the damage, putting it at about 200,000 baht.

The Chinese tourists were put into vans at about 9pm and sent to Phuket Airport in order to catch their return flight home, which was scheduled for 3 am today.

The crash was the latest in a series of similar accidents that have recently occurred in the same area, some of them fatal and most attributed to “brake failure”.

For dramatic CCTV footage of the accident that show how a quick-thinking and brave Thai lady saves a toddler from being run over by the bus, click here.

Update: Thanks to Per Butler of Wild Kingdom Tour in Patong for the footage. Mr Per, who has been a Tourist Police Volunteer in Phuket for seven years, will make the footage available to Patong Police to aid in their investigation.

Contador is beaten by meat