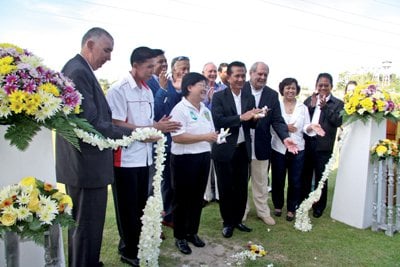 PHUKET: Sport enjoys more than its fair share of ceremony from presentations to event openings and their eventual finales.

Every one of these occasions first heralds, then celebrates the victorious and also commiserates with those that will have to try again, in order to achieve that title, trophy or winning time.

Leopard attack bowler.
One sporting occasion that inspires hope and limitless possibilities, undemanding of competitive exertion, is the cutting of a ribbon, announcing a new ground is ready for play.

As the tape falls to the ground and applause resonates among the gathered dignitaries and spectators, it’s easy to imagine your child striding onto that ground with teammates, as similar applause sounds encouragement for their sporting dreams.

With the simple cutting of a ribbon last Sunday, a new sports ground opened on Phuket, and with that ceremonial gesture came a world of possibilities for local youngsters, a “field of dreams”, to borrow a popular film title.

Since the announcement last year that Alan Cooke MBE, former British Honorary Consul to Phuket, had donated a plot of land to be used as a cricket facility, the tireless efforts of a dedicated few have seen a piece of barren wasteland transformed so dramatically that even Constable would be forgiven for thinking it was an English landscape, if it weren’t for the surrounding banana plants and coconut trees.

Stump camera. Photo: D Noble
The Alan Cooke Ground, or as its benefactor is adamant to impress, the ACG, is not as new as the official opening date suggests. To many within the Phuket Cricket Group (PCG), the grounds are very familiar, having now hosted nine Island Furniture League matches, four touring teams and several friendly games.

Blood and beer have been spilled as well as many a catch dropped, while many other droppings have been collected. Sixes and fours are accumulating as are half-centuries, but none has reached a ton. International players and teams from abroad have graced the wicket, watched by the games’ enthusiasts from the ever-developing clubhouse and its magnificent upper viewing area, which also commands a beautiful vista across the lakes of Baan Liphon in Thalang.

Lomas launch. Photo: D Noble
Preparations for the opening were complex, but managed beautifully by Siriporn, Alan’s partner. Government officials and VIPs from Asian cricket attended and four teams were organized to compete over Saturday and Sunday in exhibition cricket matches as entertainment for the crowds. Phuket’s youth development rugby and cricket teams, the Lomas and the Leopards respectively, gave outstanding displays of tenacity, mobility, coordination and skill as the adults waited for the guests of honor.

Speeches written and with an attractive translator in waiting, practicing pronunciation of unusual names, the proceedings began once the dignitaries had been welcomed then seated.

BELLA: The event’s MC and translator.

First to the Laguna lectern was the collected Mr Cooke. Immediately he struck to the heart of the ground’s importance, which he said will aid development of Thai youth cricket in association with the Cricket Authority of Thailand (CAT) and the PCG.

“I am confident that our facility [ACG] will encourage more local youngsters to participate in sports through which they can establish lifelong friendships with people from around the world who share the same passion for their sport,” said Mr Cooke.

He further acknowledged the contributions of David Roberts and Keith Brooks followed by the announcement that Property Care Services have agreed to provide floodlights for the ACG which will allow for later training hours.

Alan Cooke explains how to bowl a googly to Dr Seksan Narkwong.
After offering thanks to all in attendance, Mr Cooke suggested there was much more work ahead, but that the goal was achievable.

“I believe that with such support from our friends that we may continue to grow from strength to strength, putting Phuket firmly on the map as an international sporting destination,” he concluded.

Chairman of the PCG, Pat Cotter, next remarked on Alan and Siriporn’s contribution to Phuket rugby and cricket over the years and that these sports can now grow further with the establishment of the ACG.

“With this great facility generously provided by Alan and Siriporn, and the continued support of our local Thai coaching staff and the CAT, we are confident more people within the Phuket community will be able to develop their skills, which in turn will open up a world of opportunities to them,” said Mr Cotter.

Mr Mohideen Kader, Chief Executive of the CAT, presented highlights of his organization’s achievements from membership into the International Cricket Council in 2005 to Thailand’s women’s team achieving third place at the Asian Cricket Council (ACC)’s Women’s T20 championship in 2011 and how the ACG will help further the sport’s development.

“We are sure that with great facilities such as this, cricket in Thailand will continue to achieve great things and we will continue to support the development of cricket throughout Thailand.

“Congratulations to Alan and everyone involved in cricket here in Phuket for their wonderful efforts in promoting and developing the game here,” said Mr Kader.

“By establishing such great facilities such as the one Alan and his team have put together here, we are confident that our great sport of cricket will become one of the most popular here in Asia by helping us to develop at the grassroots level,” Syed said.

“This is the foundation and the platform for growing and developing our game. Congratulations to Alan for his vision and remarkable achievement in bringing to Phuket its first custom-built cricket ground. Finally a big thank you to all here in Phuket who are making our [ACC] dream become a reality,” he added.

Phuket Vice Governor Dr Sommai Prijasilpa, detailed Phuket’s growing popularity as a sports destination, with particular reference to the Laguna Phuket Triathlon and marathon, and having world-class facilities to host such prestigio

Phuket tour buses: Two hurt in yet another crash