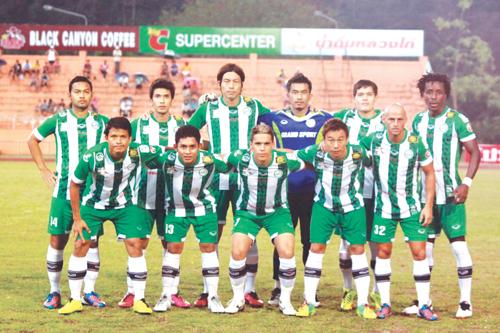 PHUKET: In their first fixture, Phuket FC, taking on the new nickname this year as the “Southern Sea Warriors” are set to play Big Bang Chula United (BBCU), a team relegated last year from the TPL.

The match will kick off today at 6pm at the Army Stadium in Bangkok, BBCU’s home pitch.

The Southern Sea Warriors’ first home match will be on Sunday, March 10, against Bangkok FC.

All home matches this season will be played at Phuket’s home ground, Surakul Stadium in Phuket Town (click here for map), with 6:30pm kick-offs. Joining Phuket FC will be a Brazilian midfielder and Japanese defender who are among the latest foreign talent to sign ahead of the official season kick-off this weekend.

Operating with a budget of more than 60 million baht this season, the team has brought in 18 new players to help the club achieve its goal of promotion to the elite Thailand Premier League (TPL), which this year is sponsored by Toyota.

Both divisions – TPL and division 1 – officially kick off the 2013 season this weekend, with 18 matches scheduled.

For each league, five games are scheduled on Saturday, March 2, and four more on Sunday, March 3.

Phuket Sports: TNT blown away in a flash by Gordon

DNP outlines conservation issues to be presented to CITES