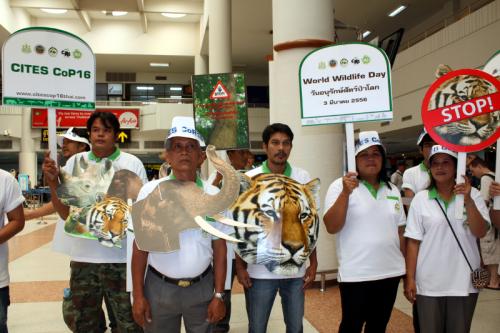 PHUKET: In town yesterday for the investigation into encroachment on Phuket’s Sirinath National Park (story here), Manopat Huamuangkaew, the director-general of the National Parks, Wildlife and Plant Conservation Department (DNP), took time to hand out pro-conservation pamphlets to tourists at Phuket International Airport.

The pamphlets also advertise the 16th annual Convention on International Trade in Endangered Species of Wild Fauna and Flora (CITES), taking place in Bangkok from March 3 to 14.

Mr Manopat outlined issues to be raised at the CITES conference.

Thailand will ask participants to list the Siamese Rosewood tree as an Appendix II plant. Appendix II refers to animals and plants for which strict measures and monitoring systems are needed to ensure that numbers do not decline.

“Rosewood is not faced with extinction,” Mr Manopat said.

However, the number of trees has decreased by more than 60 per cent in the past eight years. Thailand is believed to be home to the world’s only remaining Siamese Rosewood forests.

Thailand is seeking to change one animal from Appendix I (threatened with extinction, trade is prohibited) to Appendix II status – Siamese and saltwater crocodiles.

“Thailand has developed expertise in effective conserving and breeding of crocodiles, and could breed them for trading purposes,” Mr Manopat said.

Thailand also will announce a plan to encourage people to grow eaglewood, an aromatic resin produced by Aquilaia trees, in their gardens.

Mr Manopat believes that hosting the CITES conference will help Thai people from all sectors to understand and appreciate the value of conservation, and at the same time give Thailand a chance to improve its tarnished reputation with regard to conservation.

The conference, running 12 days and expected to host 3,000 people, will also stimulate the economy, he said.