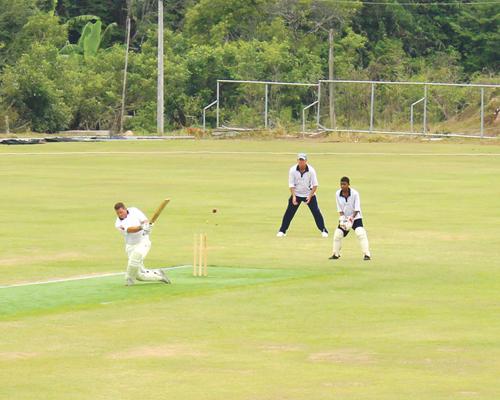 PHUKET: In the first match of the second round, the Village took on the TNT at the Alan Cooke Ground (ACG) last Sunday.

The Village, last season’s runners up, were desperate to record their first win of the season, while TNT were looking to progress further up the ladder to challenge the top teams of Patong Cricket Club and Laguna.

In the end, the Village ran out winners as TNT’s fuse fizzled out 27 runs short of their target set.

After some overnight rain, TNT won the toss and put the Village into bat, hoping to restrict them to a low score. In the very first over they bowled out Village opener Craig Murphy.

However, Martin Platts (21) and batting partner Martin Foster (48) put on a 71 run partnership. Platts finally fell in the 17th over, but Foster and Mark Roberts (25) dug in for another handy 41 run partnership, until Foster, who would surely rue missing his half-century, was clean bowled in the 27th over, with four wickets down for 125.

Harvey Nolan fell to the most basic of cricketing errors, when he was run out by not retreating to the safety of his crease, after pushing a ball to Burger Marx at short mid-on, who threw down his stumps.

With the loss of big hitting Tom Gordon in the 30th over, the Village were looking as though they would struggle to post a solid total to challenge TNT. However, Mark Ashman (12) and Chris Gordon (15n.o) provided valuable contributions to take the score to 179 before the Village were bowled out in the final over.

TNT would regret their several dropped catches during their time in the field.

After the break, TNT opener’s Simon Wetherell (69) and Anthony Du Pont (1) were looking to get off to a solid start, though Du Pont was trapped in front from the bowling of Tom Gordon in the 3rd over.

Roshan Jayasuria (31) and Wetherell combined and it was looking as if it might be all over by the 25th over if they continued scoring at seven runs per over. Their 58 run partnership came to an end in the 11th over when Jayasuriya was caught with the score on 68.

TNT were still looking confident with the in-form Wetherell at the crease, but their innings took a turn for the worse with the loss of two cheap wickets and were soon four wickets down for 88 in the 15th over.

With only one ball to go before the 20 over drinks break, Wetherell finally fell with the score on 130 runs. With only 50 runs to go and 15 overs remaining, TNT needed just 3.3 runs an over to get home. However, Tom Gordon scattered TNT captain Buck’s stumps and dismissed Garry Carrick for a golden duck next ball. He didn’t go on to get his hat-trick.

The Village were now in the driving seat with TNT seven wickets down for 130. Thai youngster, Pan, held on to take the score on to 150 before he fell in the 27th over. TNT were bowled out in the 29th over for 153.

Tomorrow’s action is provided by Patong CC who will look to maintain their momentum against ICC. Play is scheduled to start at 9am.