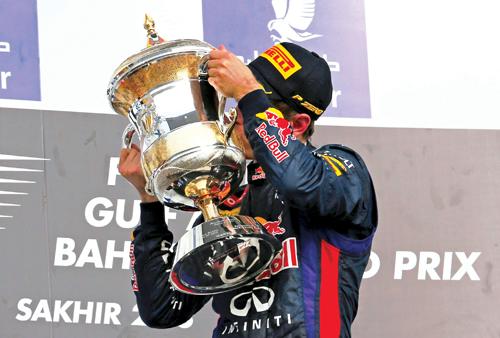 PHUKET: Before Bahrain, I said that I believed that, barring accidents, three-time winner Alonso would triumph, followed by The Iceman. Well Alonso did not triumph, thwarted by a jammed DRS wing flap, hammered closed by Ferrari’s mechanics during an emergency pit stop. It jammed open again, Alonso was forced into yet another pit stop and that was the end of his podium chances. He was reduced to battling in midfield and took a limp eighth. Massa suffered two flat tyres, which squashed Ferrari’s hopes for the race. Kimi Räikkönen did get second as predicted. Despite poor qualifying, Kimi planned a two stop strategy, and just persevered until the race came to him.

Before the race, I was looking for a third man on the podium. I mentioned Vettel who of course won, and Paul di Resta who came fourth. I considered Hamilton who came fifth and Webber who came seventh. I did not even think of Romain Grosjean who came from eleventh on the grid to be the third man. Romain is the skinny Swiss lad with the student look, including the scraggly proto-beard. Despite that he is actually 26, with significant racing experience. Last year he was dubbed the “First Lap Nutcase” by Mark Webber. He caused a multi-car pile-up at the start of the Spa race, and received a one race ban, becoming the first man to be banned since Michael Schumacher in 1994.

In his next GP he crashed into Mark Webber at the first corner and was involved in another first lap incident in Abu Dhabi. Last December, Grosjean won the Race of Champions at the Rajamangala Stadium in Bangkok. He had not had a good 2013, so Lotus brought him a new chassis for Abu Dhabi. That seems to have done him well. He drove a solid race despite an extra pit stop to remove pieces of McLaren from his Lotus. Without that, could he have challenged Kimi and Vettel?

Down the field there were exciting battles everywhere. The two McLaren drivers duelled rather too hard. Sergio Perez does not seem to understand that he is second fiddle to Jenson Button, and even managed an unsporting clip on his teammate. The team was unimpressed. Button was most unimpressed.

Lacking track success, Hamilton was busy with revelations. It seems he has pleaded with Mercedes not to ditch Ross Brawn in favor of McLaren’s technical director Paddy Lowe, who is on gardening leave, presumably in preparation for the move.

Lewis also revealed that when he tried to visit his old team during pre-season testing in Jerez, McLaren sporting director Sam Michael threw him out of the garage. What a surprise!

In the Constructors’ Championship, it’s Red Bull at the top on 109 points, Lotus 93, Ferrari 77, Mercedes 64, Force India 26, and McLaren 23. So Lotus is looking good, and Ferrari is smarting.

On to Spain next, for the start of the European season. But there is plenty of time for that.