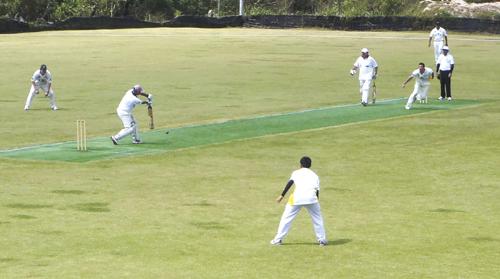 PHUKET: After a short break for the festive season, the fourth match of the Jones Lang LaSalle Hotels Cricket League was played last weekend (January 7).

Patong Cricket Club (PCC) squared off against the Village Cricket Team, with PCC claiming an all important victory in emphatic style.

Opener Mike Khan (41), who was well supported by his partner Raju Seemant (45), continued his impressive form in the league.

The duo got Patong off to a solid start making the Village wait until the 15th over before they claimed their first wicket, with the score on 109.

After the departure of Seemant, the league’s top run scorer Manish Sadarangani continued the Patong onslaught. With a strike rate of 150, Sadarangani took the game by the scruff of the neck with a score of 63.

The Village’s Captain, Kevin Quilty, spread some late season cheer with inspiring fielding, taking two excellent catches in the mid-off position. This did little to hinder the run flow though. One could debate whether the Village was still in a giving spirit or just undisciplined in their bowling, conceding a total of 56 extras in the Patong batting innings. The PCC innings came to a close on a total of 265 for the loss of eight wickets.

The Village batsmen knew that they had a huge turkey to chew if they wanted to win this game. Not only did a big run chase loom but there was also the prospect of contending with the bowling prowess of the Patong bowlers.

It did not take long for Richard Desmond to claim the first scalp, as Quilty fell with the score on six in the 2nd over. P Morton continued his good form with the ball, with figures of four for 13 placing him firmly at the top of the league’s bowling stats.

Aided by Captain Anthony van Blerk’s wicket-keeping skills – three stumpings and one catch – the Patong team carved up the rest of the Village batting line up.

Patong gobbled up the final Village wicket with the score on 130, and claimed both bonus points avaiable.

Reigning league champions Laguna play Patong Cricket Club next. The two teams will face each other on Sunday (January 13) at 9am at the Alan Cooke ground.