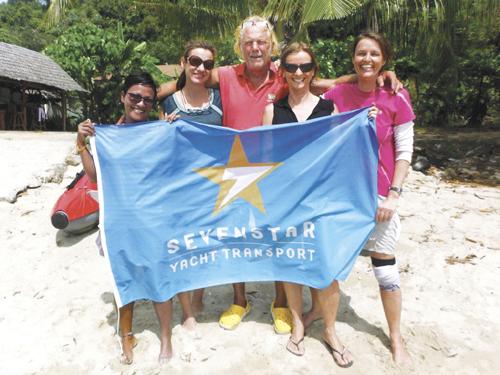 The popular sailing event takes in the scenic cruising grounds around Phuket, Phang Nga and Krabi. The event is organized by Ao Chalong Yacht Club (ACYC) and is expected to attract around 40 boats this year.

The first day’s racing is on January 31 and starts at Koh Naka Yai from where the boats will sail a 17 mile course to finish north of Ko Yai Noi.

The second day finishes at Villaguna Residences on Ko Yai Noi. The boats will sail across to Krabi on the third day and the fourth day culminates in prize giving at the ACYC.

For the first time an all women’s team will be joining this year’s Bay Regatta. The Lady Sevenstar team consists of women with all levels of sailing skills: highly competitive, professional sailors, occasional weekend yachtswomen and even an absolute novice.

The Bay Regatta is a popular live-aboard regatta famous for its parties as much as the sailing.

If you would like to register for the Bay Regatta, please visit: pangngabayregatta.wufoo.com/forms/race-registration-form/.

The Bay Regatta is proudly sponsored by the Phuket Gazette, PGTV and the nationally televised Phuket Today show on UBC/True Visions. Phuket Today, co-produced by PGTV and MCOT World, will be providing coverage of this event. The half-hour show runs six times a day, seven days a week, on channels 59 & 99.

Phuket Police have balls, promise to be gentle with ticket sales