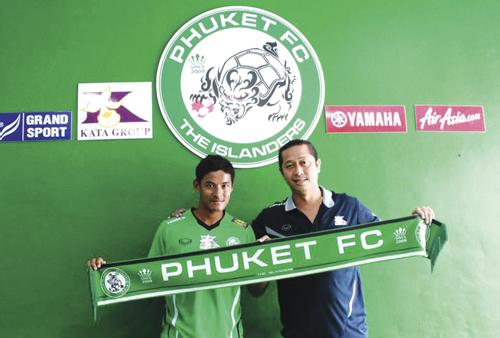 “We told Dudu that if he plays in the Thai Premier League there will be strong competition with footballers of his caliber. But if he joins us in Phuket and helps us get to the Thai Premier League, it would be a big milestone in his career profile,” Phuket FC Chairman Pamuke Atchariyachai told a press conference last week.

Mr Pamuke is confident about Phuket FC’s TPL promotion chances and says that this is his one and only goal for the team.

“I made a promise that I will take Phuket to the Thai Premier League. That is why I’m trying to get as many good and effective footballers as I possibly can,” he said.

“I’m happy and the fans are happy and have been giving positive feedback through many channels, including social network and personal messages. When footballers see that positive feedback, they want to come and play with us, too.

“Right now I am looking at 2-3 more footballers and I think we still have time until March to sign them. Also, as we have many footballers signed to our team, we received contacts from smaller teams asking if we would have footballers on loan available for them to use,” Mr Pamuke added.

Thanathep knows Phuket well as he was part of the Phatthalung team that knocked Phuket FC out of the Toyota League Cup last season. Due to problems within the club, Phattalung sold the 27-year-old right back to PTT Ranong FC, which is where Phuket FC bought him from. Thanathep is known to be a strong committed defender with a powerful shot.

“We are serious about Phuket FC. We will do all we can to get to the Thai Premier League.

“But I would like to tell the fans, that while we’re doing our part, they have a very important part to play as well. Your love and support is what we need. ‘Phuket’ for me is not just a word. It’s a great city. It’s our goal. We’ll make it happen,” he said.