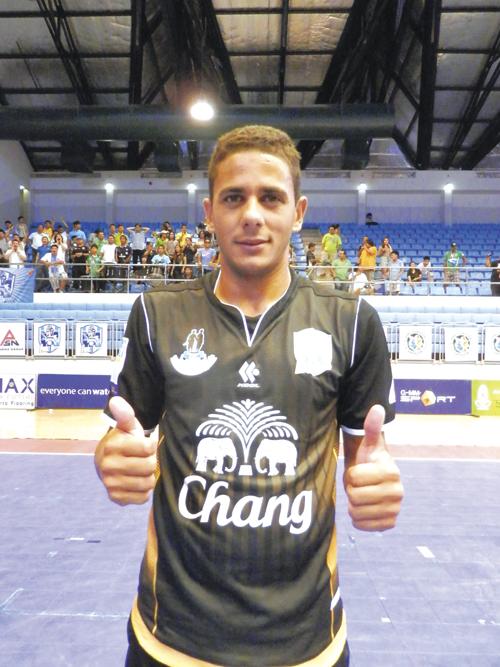 PHUKET: The Andaman Pearl’s last away game against CAT FC at Grand Sport Park, Bangkok, was played without their head coach issuing instructions from the sidelines. Suphol Senapeng was admitted to hospital in the early hours of Wednesday morning suffering from a severe stomach ache.

Brazilian Adriano Lino Luchetta missed a great chance to put CAT FC 2-0 up before Veerayut Taveegun scored his second of the game. Phuket United managed to pull level before half time through Anurak Patchloun and Jackson Santos.

The Phuket United half-time talk, given by assistant coach Patt Srivijit, clearly helped rally the team as Marcos scored straight after the restart to put Phuket in the lead 3-2.

Kanok Chidchiew increased the Andaman Pearl’s lead after 30 minutes and in the dying seconds Jackson Santos scored his second – and Phuket’s fifth – goal of the game.

Head coach Suphol Senapeng told the Phuket Gazette that Phuket Municipality has banned Phuket United from training at Saphan Hin’s Indoor Futsal Stadium without giving a reason, which means the team currently has nowhere to prepare before their home games.

This latest setback comes weeks after Phuket United were forced to buy polypropylene copolymer (PP) futsal flooring to install on the parquet flooring by Phuket Municipality, who prohibited the team from using the stadium until a new floor covering was put in place.

On a lighter note, Suphol was discharged from hospital January 10 and will take charge of the team in their home game tomorrow (January 12) against Chonburi TOS ABAC.

“Chonburi have a number of players from the Thai national team and they have just hired a new manager, Jose Maria Pazos Mendes. But we are hoping for a win or a draw in front of our home crowd” Suphol said.