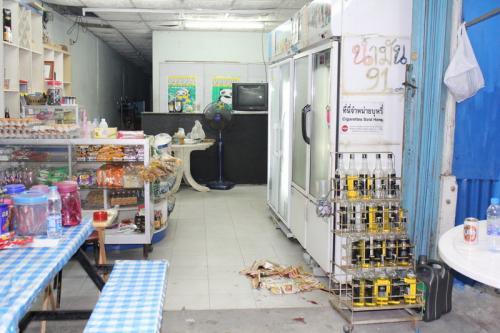 PHUKET: Phuket Police are on the lookout for a somtam (spicy Thai salad) vendor following a local building supplies shop staffer being shot in the head at point-blank range with a homemade zip gun south of Phuket Town last night.

He was drinking beer with workmates at a mom-and-pop store opposite the Naka Weekend Market (map here) at 7:30pm when the attack occurred.

“Somjit was in the store taking a beer from the fridge when a man entered the store and shot him in the head with a homemade gun. The assailant then fled the scene,” Wichit Police Superintendent Chaowalit Petchsripia explained.

Police have yet to be informed of what type of projectile was fired into – and remains embedded in – Somjit’s skull.

“We have also yet to determine the cause of shooting,” Col Wanchai added.

Questioning of witnesses to the shooting led police to a home at the nearby Anuphas Manorom housing estate.

“The suspect was not at home. We questioned his wife and found out that the suspect’s name is Kreetha Jirasereeamorn, 46,” Col Wanchai said.

“He owns a somtam shop in front of Naka Temple – and apparently he is hot tempered,” he added.