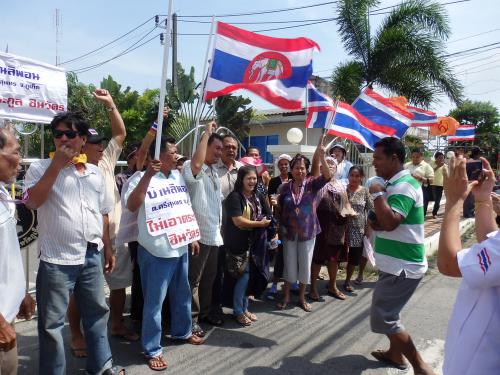 PHUKET: Emergency services throughout Phuket will remain untouched by protesters, the key protest leader on the island vowed yesterday.

“We aim to shut down every government building to encourage officials to support us instead of working for Prime Minister Yingluck Shinawatra and the corrupt government,” protest co-ordinator Suratin Lian-udom told the Phuket Gazette.

“But we will not touch any emergency service departments in those offices.”

Police stations and hospitals on the island remain open, as they are under obligation to take care of locals and tourists alike, confirmed Phuket City Police Superintendent Sermphan Sirikong.

“The protesters understand our duty to the people,” he said.

However, most of the other government offices in Phuket have shut down under pressure from protesters (story here).

Phuket Provincial Hall has been closed since January 13 (story here). Other offices, including the Department of Disaster Prevention and Mitigation-Phuket (DDPM-Phuket), the Phuket Provincial Administrative Organization (PPAO) and the Phuket Employment office are closed as well, confirmed officers from each organization.

“Even though our offices are closed, emergency services are always available,” DDPM-Phuket Chief San Jantharawong told the Gazette.

“In case of an emergency please call 191, to report a fire call 199, and to report a road accidents or need for medical services call 1669. These numbers are operational throughout the island.”

The Phuket Land Transport Office (PLTO) is closed, but officers are working on the third floor at the Big C supercenter on the bypass road (map here).

“People can come to see us at Big C and pay their annual road tax. Any other services can be applied for at Big C as well,” PLTO Chief Transport Technician Jaturong Kaewkasi confirmed.

“We do not know how long our office will be closed. I hope we can re-open soon as a lot of people require our services.”

Although Cherng Talay Mayor Suniran Rachatapruek insisted on Tuesday that the Cherng Talay Municipality offices would remain open despite protest interference, they closed on Wednesday.

“We decided to close as we did not want to cause any problems with protesters,” said Mayor Suniran. He declined to comment on how long their doors would be closed.

“Even though we are closed, our emergency services are available, just like all the other local offices. The protesters have agreed not to interfere on this point.”

Phuket’s DJ Doris to be honored with Celebration of Life, special radio show