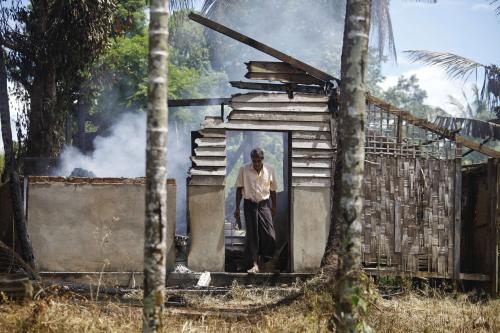 Bangkok-based Fortify Rights said it spoke to witnesses and other credible sources who confirmed the massacre, which would be the deadliest incident in western Rakhine state since October 2012, when ethnic Rakhine Buddhists fought minority Rohingya Muslims.

“The actual number of deaths may be higher but information is circumscribed by government-imposed restrictions on access to the area,” the group said in a statement.

Rakhine state government spokesman Win Myaing told Reuters on Thursday that he visited the area and found no evidence of mass killings. Government-run media on Thursday also carried denials of a massacre.

Reports of the attack began circulating after a Jan 13 clash between police and Rohingya villagers in Maungdaw township, a remote area that is off limits to journalists, while access by humanitarian groups is strictly controlled.

In the next few days, state and national government spokesmen said police had been attacked. But they denied reprisal killings amid calls by the United Nations and the U.S. and British embassies for an investigation.

The newspaper said the blood-stained uniform of a police sergeant was recovered near the spot where about 100 Rohingya armed with knives and sticks attacked a police patrol.

The differing accounts illustrate the difficulty in obtaining first-hand information in parts of Myanmar that remain off limits despite a wave of democratic reforms since military rule ended in March 2011.

Rakhine state is home to about one million mostly stateless Rohingya, who the United Nations says are subject to many forms of “persecution, discrimination and exploitation.”

These include forced labour, land confiscations, travel curbs and limited access to jobs, education and healthcare.

A Rohingya source told Reuters that a group of eight Rohingya clashed with police on the night of Jan 13. One police officer was killed along with two or three Rohingya, while the rest fled to a nearby village, he said.

Security forces then surrounded the village and went on a rampage along with some Buddhist Rakhine civilians, killing as many as 70 Rohingya, according to the source, who spoke on condition of anonymity for security reasons.

The village was now deserted, he added.

“Many people were arrested and disappeared,” he said. “Some scattered in different places, in fear.”

Sixteen suspects are being interrogated about the attack on police, the New Light of Myanmar newspaper said.

Fortify Rights said the government was carrying out “mass arrests” of Rohingya.

“These arbitrary detentions broaden the scope of the human rights violations in the area and should be immediately brought to an end,” said Matthew Smith, the group’s executive director.

If confirmed, the massacre would take to at least 277 the toll of people killed in religious conflict across Myanmar since June 2012. More than 140,000 people have been displaced.

Tens of thousands of Rohingya have fled Myanmar since the 2012 unrest, creating problems for neighbouring countries which must deal with a flood of illegal immigration.

Myanmar’s government said on Jan 16 it would not discuss the status of Rohingya at meetings of the Association of Southeast Asian Nations (ASEAN), a regional bloc it will chair through 2014, even if other countries raise the issue.

Fortify Rights said last week’s violence began on Jan 9 when a group of Rohingya passing through Maungdaw were confronted by Buddhist Rakhine residents. On Jan 14, police and civilian Rakhines clashed with Rohingyas who allegedly killed a police officer, the rights group said.

Security forces and civilian Rakhines returned in the early morning of Jan 14 and attacked villagers, mostly women and children who had not yet fled, Fortify Rights said.