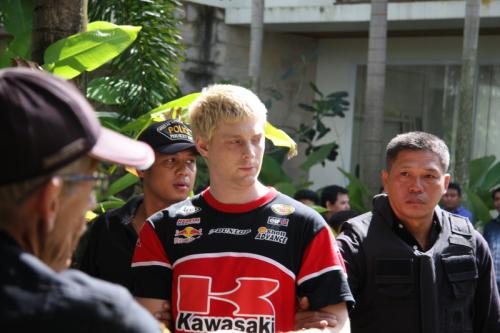 He was also ordered to pay 12.5 million baht in compensation to the victim’s family.

Mr Ljung, 28, and Tommy Viktor Soderlund, also 28, were arrested by police in a hotel room at Surin Beach, on Phuket’s west coast.

Both men confessed to their role in the killing. However, they denied any intent to murder Mr Schantz (story here).

The handing down of the sentence today followed a media blackout on reporting witness testimonies delivered during the trial as the court deemed it could unfairly support the defendants (story here).

Mr Ljung has 30 days to appeal the sentence.

“This is the first time in two and a half years that I have been happy,” she told the Phuket Gazette.

Mrs Schantz, who has been staying in Pattaya, will stay in Thailand for the sentencing of Tommy Soderlund, scheduled to be handed down by the Phuket provincial court on March 3.

Phuket protesters will not shut down emergency services, leader vows